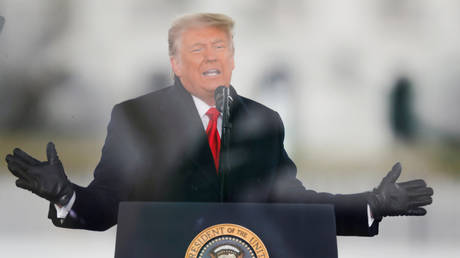 In the first set of interviews since he left the Oval Office, former US President Donald Trump said he wouldn’t rule out a 2024 comeback and took swipes at both Democrats and the Republican leadership that tried to disavow him.

Trump appeared on One America News (OAN) and Newsmax on Wednesday evening, four weeks to the day since Joe Biden was sworn in as his successor. He is scheduled to phone into Sean Hannity’s show on Fox News as well.

“I won’t say yet, but we have tremendous support,” Trump said when Greg Kelly of Newsmax asked him about a 2024 presidential bid. The poll numbers were “through the roof” and even better than before the election, the former president said.

“I’m the only guy [that] gets impeached and my numbers go up,” Trump joked.

This echoed what he told OAN a little earlier, saying it was “too early” to talk about 2024 but “we see a lot of good polls out there.”

Having been out of the limelight since he left Washington on January 20, Trump gave his takes on a number of things that happened since, from the failed second attempt to impeach him and  the passing of conservative radio legend Rush Limbaugh, to his permanent ban from Twitter.

“Twitter has become very boring and millions of people are leaving,” he said.


The former president also pointed out that unlike Democrats, Republicans like Senate Minority Leader Mitch McConnell attack their own – meaning himself. Trump issued a blistering attack on McConnell on Tuesday, calling him a “dour, unsmiling hack” helping Democrats put “America Last.”

Speaking of Democrats, Trump once again insinuated they ‘manufactured’ votes in the 2020 election, saying that “the angriest person in the country right now is Hillary Clinton because they didn’t create votes for her to win” in 2016.