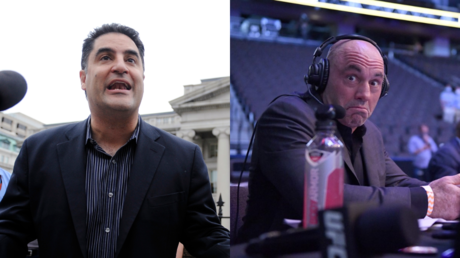 Texans may be suffering without electricity in bitter temperatures, but Young Turks host Cenk Uygur can see the bright side, as podcaster Joe Rogan and others who relocated to the state are “freezing their asses off.”

Two dozen Texans are dead, food supplies can’t reach supermarkets, and nearly 200,000 homes are still without power as of Friday morning, as freezing temperatures wreak havoc on the Lone Star State. So paralyzing is the weather that firefighters in San Antonio on Thursday were unable to extinguish a burning apartment block due to frozen fire hydrants.


One pundit managed to find an upside, however. On Twitter, Uygur, a progressive commentator, celebrated the fact that Rogan, a libertarian podcast host who had recently moved to Texas from California, was likely suffering.

“Only upside of Texas power outages is people like @joerogan, who were so proud to leave CA and move to TX, freezing their asses off,” he tweeted on Thursday. “They said they wanted less government. Congrats, mission accomplished! I hope you’re not asking the government to come help you. #Freedom”

Uygur was instantly hammered for his apparent gloating. Commenters reminded the progressive pundit that California, a byword for liberal statism, regularly suffers from blackouts and wildfires, while Texas, known for its economic libertarianism, just got hit with the cold snap of a century.

I’d rather deal with a blackout once every century than live in a place where wildfires cause blackouts every year https://t.co/p0aFqwkhMe

Because CA handles extreme weather so well, AND has super low taxes and so much freedom! You’re right, Cenk, what a bad trade. https://t.co/jc00VpTA2W

Others simply flamed Uygur for “revel[ing] in the suffering of fellow Americans.”

When you’re so jealous of Joe Rogan’s success that you celebrate millions of people suffering the impact of a freak weather event. https://t.co/5osE7OF0YZ

Alt: there is no upside to deadly and dangerous Texas power outages, no matter how deep your feelings about podcast host Joe Rogan moving there. https://t.co/Z7VdAKqI9a

The disaster in Texas has been pinned by some liberals on the state’s hands-off government and its use of fossil fuels, but, conversely, has been blamed by some conservatives on the failure of wind turbines to meet increased power demand. However, all sources of electricity were hampered by the inclement weather, and Governor Greg Abbott has demanded that ERCOT, the state-owned company responsible for Texas’ power grid, upgrade its infrastructure. The Senate Energy and Natural Resources Committee is also planning on hauling ERCOT officials to Capitol Hill for a hearing.

Despite Uygur’s jeering, Rogan likely has power in his Austin home. Travis County, where Austin is located, saw power restored to all but 20,000 customers as of Friday morning. Rogan relocated there in August, citing California’s high taxes, crime rate, and “restrictive” government policies. He was not alone in making the move. Tesla CEO Elon Musk also moved to Texas last year – one of more than 687,000 to do so over the past decade, according to figures cited by the Dallas Morning News.

All in all, Californians make up 13 percent of all relocations to Texas since 2010, with more arriving from California than any other state.