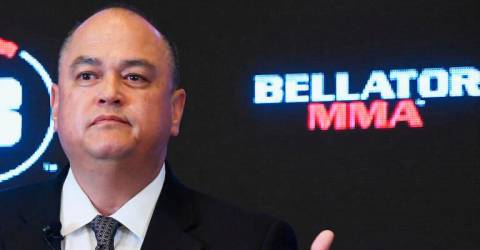 STOCKHOLM: Mixed martial arts has nothing to fear from the extension of legal protections to fighters that originated in boxing, Bellator CEO Scott Coker (pix) has said in the wake of two new TV deals that will move MMA further towards the mainstream.

Coker’s promotion recently announced broadcast deals with Showtime in the US and the BBC’s iPlayer streaming service in the United Kingdom, and he said his organisation would welcome the extension of the Ali Act, named after Muhammad Ali and designed to protect the rights and welfare of boxers, to MMA.

“Boxing has had it for decades, and if the government moves towards that in MMA, we’ll embrace it. We’re not going to fight it, and it might be the best thing for everybody,” the 58-year-old Coker said in a telephone interview.

“To be honest, it puts everybody on an equal playing field, us included… I think it might be a blessing in disguise.”

The Ali Act was originally enacted in May 2000 to protect the rights and welfare of boxers, to aid state boxing commissions with the oversight of boxing and to address issues of sportsmanship and integrity in the industry.

One major issue for MMA is that the Ali Act bans promoters from having a ‘direct or indirect’ financial interest in a fighter. MMA fighters usually sign exclusive contracts with promotions and are not allowed to negotiate freely with others.

The application of the act to MMA could also see a system of external rankings and mandatory title challengers imposed.

In 2016 a bill was introduced by Congressman and former fighter Markwayne Mullin to extend the Ali Act to MMA, and the recent change in government in the United States has re-ignited talk in the sport that more regulation may be on the way.

The UFC, the biggest promotion in MMA, has previously told Reuters it would oppose such a move as it would affect their ability to match-make freely, but Coker and Bellator take a different view.

“We’ve always been a ‘fighters first’ organisation, and if they (fighters) want to go this route and the government wants to go this route, then we’ll do it, we’ll abide by it. We’ll make some adjustments and it’s business as usual, as far as I’m concerned,” he said.

Bellator staged 18 events, including an undercard from Paris broadcast on iPlayer, in a 2020 calendar severely curtailed by the COVID-19 pandemic, but the Viacom-owned promotion has safety measures in place as it ramps up its activity again.

“We are still under the guidelines of the Viacom protocol committee, we are governed just like Paramount Pictures,” Coker said. “Let’s say they’re doing a movie or a TV production, we are in the middle of that as well because we have to abide by their protocols.

“On a fight week I’m normally out and about, now I’m in my hotel room 80 percent of the time, but if that’s what it takes to continue to do fights and to provide content for Showtime and broadcast partners and, most importantly, for the fighters… we’re going to stay in our bubble.”

With major TV deals secured in the US, UK and Russia, Bellator are now turning their attention to other markets.

“In most parts of the world, you will be able to see Bellator live before April 2,” Coker said. – Reuters