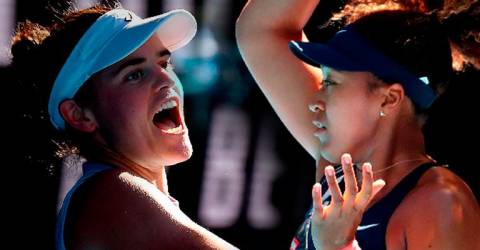 MELBOURNE: In her junior playing days Jennifer Brady was repeatedly told by her coaches that she had the potential to be a great tennis player but it was not until last year that the American believed in her own ability.

The 25-year-old, ranked 24th in the world, reached her maiden Grand Slam final on Thursday when she overpowered Czech Karolina Muchova 6-4 3-6 6-4 in the Australian Open semifinal.

“I would say throughout my junior career, all the coaches that I had … were always telling me I had potential to be a great tennis player,” Brady told reporters.

“I had a bit of a temper as a kid. Wasn’t really mentally the toughest. So I think that has kind of just shifted my whole career, just being able to stay in tough moments, close out tough matches, just fight my way back regardless of the score.

“I was told … I have a good forehand, good serve. I just needed to put the two things together and now I have.”

Brady, who played collegiate tennis for the University of California, had a breakthrough 2020 when she reached the semifinals of the US Open and also broke into the top 25 of women’s tennis.

She then started believing in herself.

“I would say probably last year, because the start of the year I had some good wins, I was practising with the top players,” she said with a smile.

“Once I was able to see, okay, they don’t really hit the ball much bigger than I do, they don’t do anything super spectacular compared to what I do, so I can do the same.”

Brady was one of the 72 players who spent two weeks in hard quarantine upon arriving in Melbourne and was denied the chance to train for up to five hours a day like the majority of the field.

After being confined to her hotel room for 14 days, reaching the final means all her hard work in the off season has not gone to waste.

“I have definitely been practising hard. I think I have earned the right to be sitting here, to be playing in a final, in a Grand Slam final on Saturday,” she said.

Brady’s US Open run ended with a three-set defeat to Naomi Osaka and it will be the Japanese three-time major winner who will again be across the net on Saturday.

Brady said she was not sure how she will feel on Saturday.

“I can enjoy the moment and just try to play tennis and not really think too much about it,” she said.

“We both played a really good semifinal match at the US Open. Unfortunately there were no fans, but the next time we play there will be fans. That’s going to be something that’s going to be extremely exciting.” – Reuters