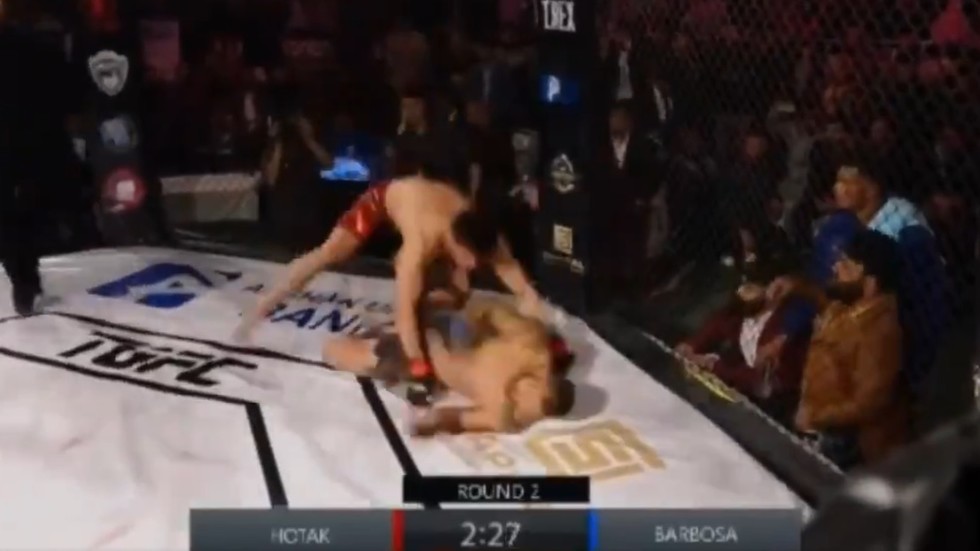 Brazilian featherweight Leonardo Barbosa says he ‘took a dive’ in a mixed martial arts bout earlier this month in Afghanistan after being pressured by an unknown gunman in the locker room prior to the fight.

Barbosa admitted to feigning injury as a result of a knee to the body in the fight against Ahmed Wali Hotak in Kabul on February 11, leading to the referee calling the bout in favor of the hometown fighter – but he claims that the fight’s telling blow didn’t come in the cage, but in minutes before he even made his walk into the arena.

The Brazilian fighter said on social media that he was threatened by a gunman backstage before the fight. The post – which has since been set to ‘private’ – was met with extreme pushback from Afghani MMA figures, many of whom are alleging that Barbosa was lying.

However, the finish of the fight appears to give some credence Barbosa’s allegations. A clip showing the climax of the bout went viral online last week, showing Barbosa theatrically reacting to a knee-strike to the body as the local fans erupt in cheers and applause.

The last seconds of the bout are all the more unusual given that, by all accounts, Barbosa had been in control of the fight until that point and had broken his opponent’s nose in the first round.

However, in the second frame he became concerned when he saw the same gunman who threatened him in the arena’s VIP area close to the cage.

“He kept screaming, extremely aggressive,” Barbosa said via MMA Fighting. “He got closer to the cage in between rounds and started saying something similar to what he had said in the locker room, only more aggressive. I was winning the fight, I won the first round well, my opponent had a broken nose and needed surgery the next day, and I think I would have won, but I felt unable to do anything in that fight.

That’s an odd reaction. A body shot doesn’t cause a person to throw his head back like that. You fold inward.

That knee to the body reaction seemed like something out of professional wrestling.

“And then that happened. I threw the fight,” he said. “I came back different for the second round, a series of things were going through my mind.

“I have a son, I have a family. Him killing me wasn’t my biggest fear because the repercussion would be huge, but, I don’t know, people there are a bit complicated. It’s complicated, really. That region is still at war, there are terrorist attacks going on and people is kind of used to that now. A car exploded while I was there and they simply isolated the street, the army put a detour to another street and that’s it.“

Barbosa continued, detailing his unease at the environment in which he was competing – particularly after he was forced to travel to the fight alone after his manager tested positive for Covid-19 in the days before the fight. He says that his passport was confiscated and only returned to him when he checked in for his flight home.

“I had no documents in an unfamiliar country,” he said. “I never thought I’d go through a situation like this and I hope never to go through again. My biggest fear was something happening and getting trapped there. I would do something to fight back and defend my life, right?

“I don’t know their laws. The first thing that came to my head was the fear of not being able to leave that place, of being arrested for some reason or going to a hospital without my documents, only the immigration paper.”


He also confirmed that he has been offered a rematch with Wali Hotak by officials for an upcoming fight card in Dubai and says that this time he will be prepared – and have a full team with him for his safety.

“I’d go with a different structure this time, with my cornermen and everything else,” Barbosa said. “I’ll never travel again without my cornermen.

“This rematch will be different. I believe I can win this fight with ease, to tell you the truth.”