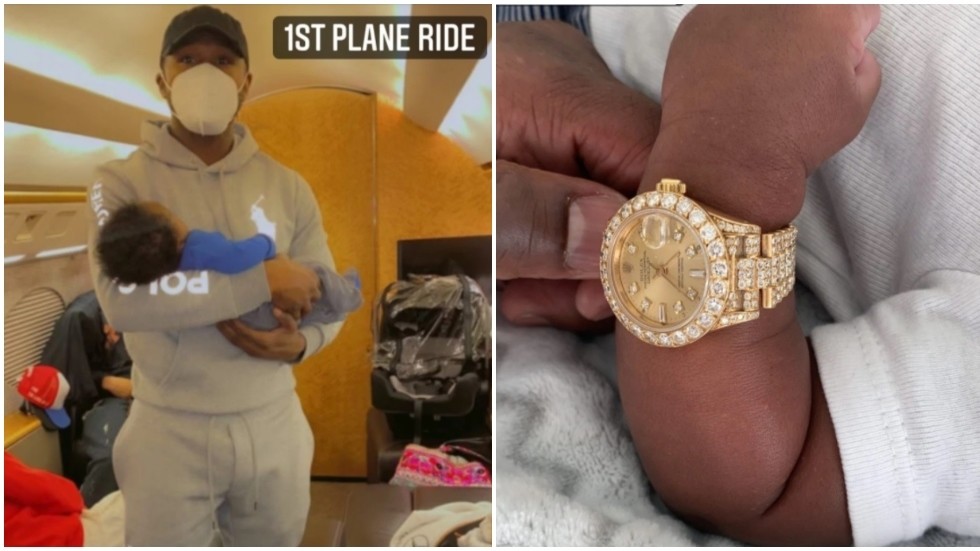 If much of your public persona is built on a foundation of exactly how wealthy you are, you better not shirk your responsibilities when it comes to buying gifts – and Floyd Mayweather has spared no expense for his new grandson.

Mayweather’s daughter Yaya and her partner, rapper NBA Youngboy, enjoyed the arrival of little Kentrell Jr last month, and the five-week old youngster has become perhaps the youngest-ever entrant into the Rolex Club after Mayweather reportedly gifted the $49,000 timepiece to the infant – as well as taking him on his first-ever ride on a private jet.

The watch appears to have been customized to Mayweather’s instructions, however, and has DIAMONDS encrusted into the strap and around the perimeter of the watch face – additions which could have pushed the final price-tag somewhere north of $140,000.

Little fella doesn’t even know what the number 1 is yet and is already rocking a rolex. 😂

LOL the dude doesn’t even know his name and he’s sporting a Rolex & flying private..dreams 😂👏🏾

Taking to Instagram to show off her son’s wares, Yaya tagged her father in the post and announced: “KJ’s papa got him his first Rolex.”

However, even the astronomical price speculated in the press pales in comparison to the money that Mayweather has shelled out for watches in the past, with just one watch in his collection reported to be valued at $18 million.

In fact, the 50-0 retired boxer boasts a hefty collection of expensive watches, saying in a recent interview that he wears a new watch for each day of the month.

“Now if I go on vacation, my fault, when I go on paycation for 30 days, I take 30 watches with me,” Mayweather said via The Sun.


Mayweather is thought to have added the most expensive watch to his collection soon after he defeated Conor McGregor in August of 2017 to advance his professional record to an unsurpassed 50-0, after which he purchased the Jacob & Co Tourbillon timepiece – which was later dubbed “The Billionaire Watch“.

The boxing great’s watch collection is estimated to be worth in excess of £20 million ($28 million) which, frankly, leaves him with little excuses as to his repeated tardiness at press conferences over the years.