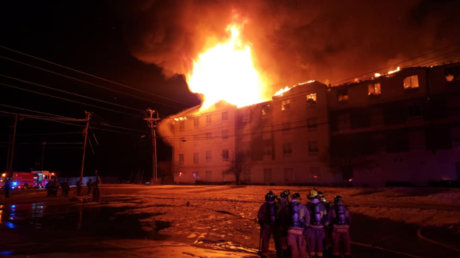 Guests at a four-story hotel in Texas were forced to flee into the freezing cold as a fire engulfed the entire building when the sprinkler system failed due to frozen pipes.

The fire broke out at the Hilton Garden Inn near Fort Hood in Killeen, Texas shortly before 9pm local time. The hotel had been serving as emergency accommodation for many stricken local residents, including several soldiers from the nearby Fort Hood.

Eyewitness footage from the scene purports to show the fire as it ripped through the hotel complex.

One guest was treated for minor injuries at the scene, while two others presented at hospital suffering from the effects of smoke inhalation. The remainder managed to evacuate to safety.

The displaced guests were sent to the Skyline Baptist Church after the incident, and the American Red Cross and Salvation Army attended the scene to offer what help they could. According to local media reports citing the Hilton hotel app, the hotel was fully booked on Friday night.

“Firefighting efforts were hindered due to the automatic sprinkler system being out of service because of frozen pipes,” the Killeen Fire Department said.

The authorities urged the public to avoid the area. They also shut down the East Central Texas Expressway at WS Young Drive, putting diversions in place as they tackled the blaze.

“We are in Stage 5 water conservation due to extremely limited water supply,” the city tweeted.

According to the Killeen Professional Fire Fighters’ Association, some of their crews have not been home in 96 hours, as they have been forced to respond to more than 150 calls a day, up from the usual 80 a day at this time of year.

An apartment block in San Antonio collapsed as authorities couldn’t retrieve enough water to douse the flames in time, due to fire hydrants in the vicinity being frozen by the recent cold snap which has claimed the lives of dozens of Texans.