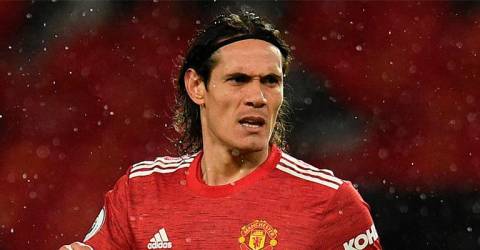 The 34-year-old Uruguay international has impressed on and off the pitch since joining on a free transfer from Paris Saint-Germain in October.

Cavani, PSG’s all-time top-scorer, signed a one-season deal with United with the option to extend by a further year.

He has scored seven goals in 24 appearances for United and Solskjaer has made no secret of his hopes to keep him at Old Trafford.

“I’ve been impressed by him,” said the United boss. “He’s really gelled in the group and we’ll sit down with him and speak with him of course in the near future to see his plans and our plans.

“It’s a good discussion to (have). We always speak to the players and with his contract situation at the moment we’re very pleased with what he’s done.”

Cavani was ruled out of Thursday’s impressive 4-0 win against Real Sociedad in the Europa League with a knock but Solskjaer hopes it will not keep him out of Sunday’s return to Premier League action against struggling Newcastle.

Second-placed United could be 13 points behind Pep Guardiola’s men at kickoff but Solskjaer is not focusing too much on their rivals.

“We’re going to have to get a good run together if we’re going to put pressure on City and it should start on Sunday, of course,” he said.

“We can’t hide the fact that we have dropped off our form a bit the last few weeks.

“We dropped points against Everton, Sheffield United, West Brom – points that we feel we deserved more and we should have got more.

“Tonight (Thursday) was about finding ourselves, tonight was about getting the X factor back in, the brightness and the focus, so Newcastle will be a very important game for us.” – AFP