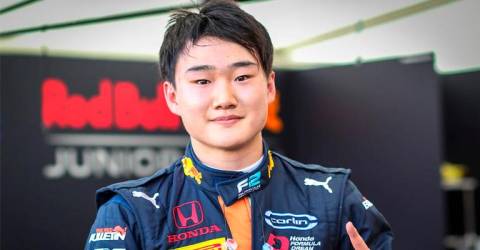 PARIS: AlphaTauri’s new driver Yuki Tsunoda (pix) said Friday that his ambition was to be “the first Japanese driver to win a race in Formula 1.”

The 20-year-old, who replaces the Russian Daniil Kvyat in the AlphaTauri stable, is the first Japanese driver to compete in Formula One since Kamui Kobayashi in 2014.

The diminutive Tsunoda – he is 1.59 metres (5ft 3in) tall – was named FIA rookie of the year in December after finishing third in his debut season with British team Carlin in the Formula 2 championship.

He has set his sights on making an even bigger impact in F1.

“I just want to beat the other drivers and I also want to be the first Japanese driver to win a race in Formula 1,” he told the team’s website, adding that he recognises the big step-up in class from Formula 2.

“The speed of the cars, of course, is a huge difference but also the fact that the season is much longer,” he said.

“On a technical side, there are many differences and it’s quite a big step up. The team is so much larger (so) there are a lot more engineers to report to.

“In addition, it will also be necessary for me to remain well trained and strong, both physically and mentally, to cover 23 races with minimal down time — this will also be a big difference from F2.”

Tsunoda, who is backed by the junior programme of AlphaTauri’s engine supplier Honda, joins Frenchman Pierre Gasly at the Italian team.

“Pierre is really fast and already has a win under his belt in F1,” said Tsunoda.

“The first target for every driver is to beat your teammate but he will be a hard one to beat. He’s an incredible talent.”

The mutual admiration spins both ways with 25-year-old Gasly, who won in Monza last season, looking forward to working with his new teammate.

“He (Tsunoda) is a very quick driver and he will help us move the team forward,” said Gasly.

“I know Yuki, he is a competitive guy and showed what he can do in F2, that’s why he was promoted to F1 after just one year.

“He lacks experience, so it won’t always be easy for him, but I think he is talented.”

The Frenchman contracted coronavirus while training in Dubai last month but said “luckily, I felt good, so I could continue training”.

AlphaTauri finished seventh in last season’s constructors’ championship and Gasly tenth in the drivers’ title race but team boss Franz Tost said they were hoping for better in 2021.

“In 2020, we were fighting against other teams like McLaren, Renault and Racing Point,” he said at the team launch on Friday.

“But our target for this year is to consistently be at the top of the midfield pack and improve further.”

It is AlphaTauri’s last year with Honda engines as the Japanese manufacturer is quitting the sport at the end of the season. – AFP