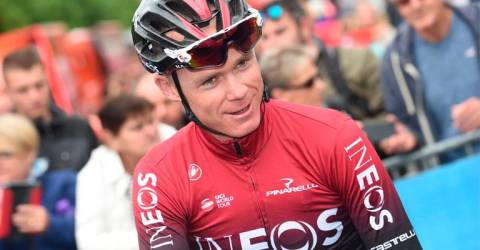 PARIS: Chris Froome (pix) will be part of a top-drawer line-up as the four-time Tour de France winner gets his second injury comeback rolling when cycling’s first major race of the season, the UAE Tour, starts on Sunday.

The reigning Tour de France champion Tadej Pogacar, Quick Step’s rising star Joao Almeida and the winner of the UAE race last year, Adam Yates, should feature strongly in what is likely to be a tight struggle in the seven-stage event.

This race was cut short last year by a Covid-19 outbreak among the teams, making it one of the first international sports events to feel the effects of the pandemic.

Twelve months on, stringent measures are in place to prevent a recurrence, with staff and riders accommodated in different hotels.

Froome’s quest to get back to the top has seen him leave Ineos and join Israel Start-Up Nation after he failed to make the cut at the British team for the Tour de France last season.

The Israeli team allowed 35-year-old Froome to undergo intense rehabilitation work away from the rest of the squad at a specialised athletic performance centre in Santa Monica, California.

“The hard-yards of my rehab are behind me but I’ll be continuing it for the remainder of my career,” said Froome, who has been doing four two-hour sessions most weeks for the past two months.

“I’m not at all the favourite here. This is my first race with ISN and I’m here to start my progression towards the Tour de France,” he told a pre-race press conference. “This is the beginning of my campaign to be ready for the Tour de France.”

At just 22 the Slovenian all-rounder Pogacar, who produced an outstanding rookie performance to seize victory in France last year, will be a watched man with his UAE Emirates Team under pressure to deliver on home soil.

Pogacar is a star in the UAE with his image emblazoned on the tallest building in the world, the Burj Khalifa in Dubai.

“There’s more pressure on me to win than last year,” Pogacar said on Saturday. “It’s really important for ou team. It’s our home race. But I’m the same man, with the same goals and the same motivations.”

Pogacar had to settle for second last season after winning one of the two mountain stages.

Defending champion Yates will make his first major outing in Ineos colours after leaving his twin Simon at Orica-GreenEdge, the Australian outfit they both rode for.

Adam has reaped an immediate reward from the move by being named Ineos team leader for the Vuelta a Espana this season.

“Everything is going great in my new team. We have come to win stages and win the race, but there’s no pressure,” Yates said.

He will have strong support from recent Tour de Provence winner Ivan Sosa and the pulsating time-trial specialist Filippo Ganna, unbeaten in a time-trial in over a year.

“The team is happy with my style and the fans are happy too,” said Ganna, who will be a contender for the Olympic time-trial in Tokyo and for stage two on Monday.

Before that Ireland’s Sam Bennett and Australia’s Caleb Ewan will renew their sprint rivalry.

The pair both ride for Belgian teams, are neighbours and enjoy a strong friendship as they divvy up most key sprints between them.

“The roads here are just great for racing and I’m looking forwards to taking on the rest of the guys out there,” Bennett said.

The race is the elite level World Tour’s first major event of the 2021 season after the Tour Down Under was cancelled. – AFP