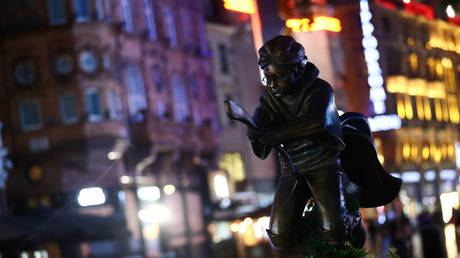 A lead designer for the Harry Potter video game ‘Hogwarts Legacy’ has found himself embroiled in controversy as past right-leaning videos have been uncovered by social justice warriors.

The designer, Troy Leavitt, is currently working with development studio Avalanche Software on the high anticipated video game, but many on social media appear to want him nowhere near the project now that his past has been put under the spotlight.

Leavitt’s YouTube videos have included titles like “The Injustice of Social Justice,” “In Praise of Cultural Appropriation,” and “Are Thoughtcrimes Becoming Real?” First highlighted by Did You Know Gaming contributor Liam Robertson, Leavitt was accused of being a “far right YouTuber” making “anti-fem[inist]” videos.

yeah uh if you were thinking of playing hogwarts legacy because you hoped it had some distance from the transphobic stuff rowling spews, maybe……no https://t.co/AeG63jOU7d

While there have been plenty of social media users denouncing Leavitt for his personal YouTube page, there has also been a quick response from cancel culture critics who are spinning Leavitt’s controversy into a good thing.

“Where can I pre-order?” asked one Twitter user, echoing similar statements from numerous others.

Leavitt’s YouTube channel is personal, but it is promoted on his Twitter page. In one video, he claims his employers, Avalanche and Warner Bros., are aware of his output and did not object to it when it came to their attention.

“I’m happy to say that, even though I disclosed my YouTube channel to WB Games, it didn’t appear to be an issue for them,” Leavitt said.

Not that they endorse anything that I’ve said, of course, but at least they seem more concerned with making good games than with pushing some kind of a social justice agenda, so there is hope.

Harry Potter creator JK Rowling has also found herself facing boycotts and calls for her to be cancelled in recent years for her views on gender being labelled by many as transphobic. Like Leavitt, Rowling has also seen a swell of support from others deeming the criticism overblown and politicized by social justice warriors.

Also on rt.com
JK Rowling calls for civility in trans debate after ‘heart-breaking’ letters from women who regret irreversible surgery


Warner Bros., however, felt forced to distance the game from the creator of the franchise after the criticisms, updating the game’s site to say Rowling is not “directly involved” in the project.

The pushback trend could be seen in the case of Gina Carano recently, as well. The MMA-fighter-turned-actress was dismissed from the popular series ‘Mandalorian’ by Disney after angered liberals took issue with multiple right-leaning social media posts, one in particular comparing modern political discourse in the US to Nazi Germany.

Shortly after her firing, Carano signed a movie deal with Daily Wire. Founder Ben Shapiro promised to “uncancel” the star and others through his new film distribution wing.