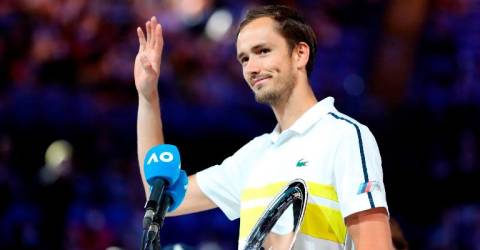 MELBOURNE: Daniil Medvedev (pix) had the enviable record of defeating Novak Djokovic in three out of their last four matches before the Australian Open final, but after Sunday’s thrashing the Russian was left wondering if his best would have made any difference.

Medvedev walked on to the floodlit Rod Laver Arena for his second major final, having won the Paris Masters, the ATP Finals and the team-based ATP Cup in a 20-match winning streak that included 12 straight wins over top-10 opponents.

But his unbeaten run and the past record counted for nothing as Djokovic tutored him on his “living room”, showing him how he has managed to remain unscathed in nine Australian Open finals with a 7-5 6-2 6-2 victory.

“I feel like I could have played better,” Medvedev told reporters, when asked to explain if he played badly or Djokovic was too good. “Especially looking at the matches where I played him.

“At the same time there is always a question maybe he was not that good (during) the other matches I played him … the question is how did he manage to win here nine times out of nine. Probably all nine times he was better than his opponent.

Medvedev lost in a fifth set decider against Rafa Nadal in his maiden Grand Slam final at the 2019 US Open.

He said the defeat in New York hurt more than his Australian Open loss as he had more chances to win that day.

“But both losses hurt,” the 25-year-old said. “The only thing that keeps me warm is that I always try to do my best on the court. I think I got closer because I always say experience is the key for me.

“Next time if I play Novak ever here in the final, I am going to do some things on the court, maybe off the court also, differently because at least I would have this experience where he won (against) me easy.

“Doesn’t mean that I will succeed, but that’s (the) life of a tennis player.”

Labelling Roger Federer, Nadal and Djokovic as his three most difficult opponents and “cyborgs of tennis”, Medvedev said he would be happy to win a Grand Slam against any opponent.

“I had two (Grand Slam) chances. I lost both of them. Hopefully I will have some more.” – Reuters