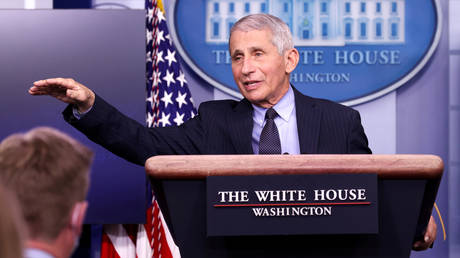 After cautioning vaccinated individuals from resuming normal activities like dining out or attending large group events, Fauci tried clarifying his stance in a Tuesday interview with CNN, saying more relaxed guidance from the Centers for Disease Control and Prevention (CDC) will be coming “soon.”

The agency, Fauci said, needs to “sit down, talk about it, look at the data and then come out with a recommendation based on the science.”

“Common sense tells you that, in fact, you don’t have to be as stringent in your public health measures,” he added, but “we want to get firm recommendations from the CDC.”

Also on rt.com
Wayne Dupree: Fauci’s latest prediction on masks shows this is all about controlling people rather than controlling Covid


The CDC did update its guidance earlier this month to say those who have received both doses of either the Pfizer or Moderna vaccine do not need to quarantine if they have been exposed to someone who is Covid-positive.

Fauci was much harsher when talking about vaccinated individuals during a Monday press conference where he said “there are things, even if you’re vaccinated, that you’re not going to be able to do in society.”

The health adviser also took aim at Trump during his Tuesday interview, partially blaming his “damaging” treatment of Covid for the death toll from the virus jumping to over 500,000 this week.

“Do you think that his denial and lack of facts contributed to this level of loss?” anchor Alyson Camerota asked.

“I certainly think that that’s part of it,” Fauci replied. “When you have such a common force, such a powerful force against you…you’ve got to do it together in a unifying way and not have any kind of political ideology divisiveness getting in the way of what we’re trying to do. That’s not the only thing that really was a problem, but that’s certainly in my mind, having lived through it, was something that I found really to be unfortunately damaging.”

Also on rt.com
Keep that mask on: Fauci says face coverings could be needed even in 2022, as he defines new ‘normality’


While Fauci continues to be celebrated by liberal media outlets and politicians, his standing among more conservative-based critics appears to be at a low-point, with #FireFauci trending on Tuesday.

“Dr. Fauci has very clearly exploited a crisis for his own ego and pursuit of stardom. He has no regard for the businesses destroyed, lives taken from suicide, or the children who have fallen behind in school. But hey, did you see that TV interview he did the other day?” writer Lisa Booth tweeted.

“He has continuously contradicted himself, disseminated misinformation, assaulted our freedoms, & is still advising the president on COVID policy. It is clear he is following special interests, not science,” Dr. Simone Gold added.

Now that we have the vaccine and a decent distribution system please kindly but firmly take Fauci’s microphone away and dissolve it in acid and then fire the acid into the sun, because we would actually like ppl to *take* the vaccine and Fauci is tremendously Not Helping.

Is he just winging it now? Theaters and restaurants in Virginia have been open at limited capacity, masks required, and extensive cleaning measures for months without problems even BEFORE people were vaccinated. Feels like we’re moving backwards now. https://t.co/KDTcCpJOMB

Fauci should end every single interview by saying “the quicker people get vaccinated, the quicker things go back to normal” instead of waxing philosophical about all the ways in which “normal” will never be the same again.

The numerous calls for Fauci’s firing follow The View co-host Meghan McCain tearing into the health official on Monday for inconsistent messaging on the virus and calling the vaccine rollout a “disaster.”

She doubled down on her position on Tuesday and joined in with the chorus of voices criticizing Fauci.

He told me not to wear a mask and that masks don’t work when I was 3 months pregnant in the middle of Manhattan.He then later admitted it was an intentional lie so we would donate masks to essential workers.Now I’m being told to wear 2 masks. But yes I’m “misguided”. 🙄 https://t.co/HEGCPmMKsB

The messaging is incredibly inconsistent and confusing. I voiced my frustration honestly despite the fact that if you and twitter don’t like it, I represent the feelings of many Americans. I also believe sainting our public figures to infallibility is dangerous and irrational. https://t.co/HEGCPmMKsB