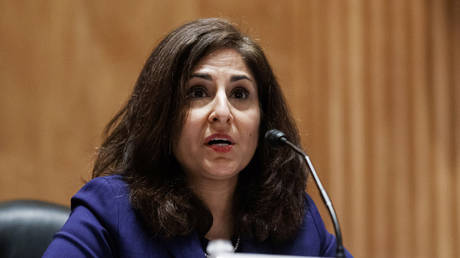 The confirmation of Neera Tanden, Biden’s polarizing pick for head of the Office of Management and Budget, has been further derailed after Republicans suggested they’d vote against it, insider sources told the media.

Both the Senate Homeland Security and Governmental Affairs Committee and the Budget Committee postponed meetings set for Wednesday in which they were scheduled to vote on Tanden’s confirmation, according to sources cited in several US outlets.

White House Press Secretary Jen Psaki refused to say whether the Biden administration was planning to withdraw Tanden, instead gushing over her “broad spectrum of support” and her potential status as the first South Asian woman to lead the OMB.

However, Tanden’s history of partisan sniping on social media has not won her many friends in the Senate, with a history of attacks leveled at precisely the senators whose approval she now needs to secure the directorship.

Also on rt.com
Why Biden’s pick of Neera Tanden for budget chief might signal a good thing (for the rest of the world)


US Senator Joe Manchin (D-W.Va.), for example, suggested her “overtly partisan statements will have a toxic and detrimental impact on the important working relationship between members of Congress and the next director of the Office of Management and Budget.” Several Republican senators, including Maine’s Susan Collins and Ohio’s Rob Portman, also said they too would vote against her.

Tanden, who served in both the Obama and Clinton administrations and worked by Hillary Clinton’s side during her failed presidential campaign, has never been one to mince words with her foes on Twitter. She infamously deleted over a thousand tweets upon learning she would be subjected to the usual scrutiny leveled against cabinet nominees, having dubbed Republican senators “vampires” in the past and setting aside an especially virulent level of hate for her all-time nemesis, Independent Vermont Senator Bernie Sanders (who ran for president as a Democrat in 2016 and 2020), and his supporters.


As president of the deep-pocketed think tank the Center for American Progress, which rakes in hefty sums from Big Business and Wall Street, Tanden was seen by critics as someone who came to represent the ultra-establishment wing of a Democratic Party, leaving no room for working class issues or efforts to rebuild the country’s shredded social safety net. If the administration is unable to get Tanden over the finish line, it might be content with Shalanda Young, a long-time congressional aide who was already on track to become deputy director of the OMB. If confirmed in Tanden’s place, Young would be the first black woman to hold the position.