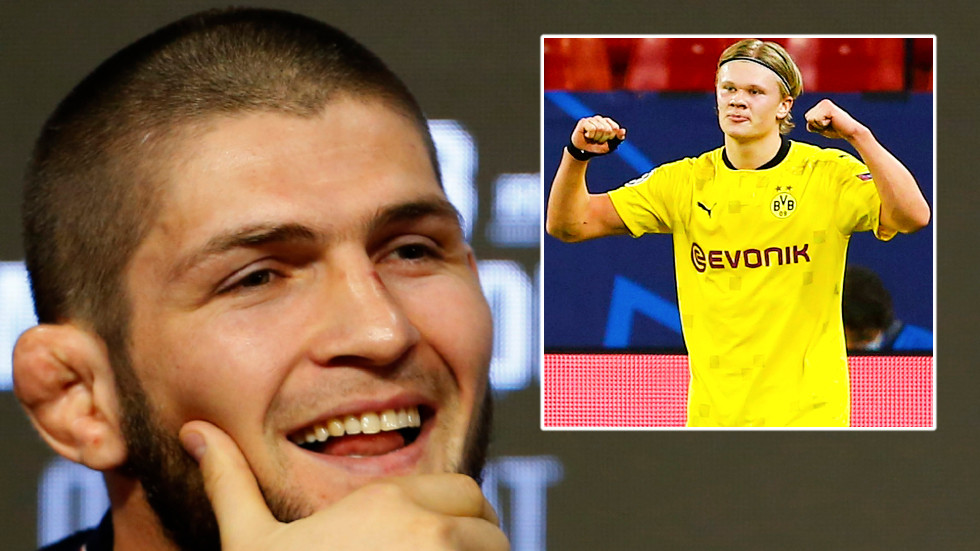 Striking sensation Erling Haaland has joined an illustrious list of footballers to have swapped messages of admiration with Khabib Nurmagomedov, following in the footsteps of the likes of Cristiano Ronaldo and Kylian Mbappe.

Hot on the heels of Paris Saint-Germain hitman Mbappe signing a shirt for Nurmagomedov after the UFC superstar watched him destroy Lionel Messi’s Barcelona in the Champions League, hotly-tipped Haaland has happily followed suit.

Nurmagomedov proudly showed off Haaland’s signed shirt from German Bundesliga side Borussia Dortmund, where the 20-year-old has hit form that has seen many predict he will join the likes of Mbappe among the successors to Messi and Ronaldo as the hottest property in football.

“Thank you so much, beast,” said Nurmagomedov on Instagram, revealing that hotshot Haaland had written “champ” on his latest cherished keepsake from a top footballer.

Haaland duly replied in kind on his platform, telling the unbeaten Russian: “No problem, champ.”

Huge football fan Nurmagomedov is steadily building an enviable shirt collection. Shortly before he first won the UFC lightweight title in 2018, “The Eagle” posed with Ronaldo while the Portugal captain held up a shirt bearing the fighter’s name on the back.

Ronaldo was starring for Liga heavyweights Real Madrid at the time, and Nurmagomedov has frequently made mention of his support for the Spanish giants.

Nurmagomedov also received a signed shirt from one of Ronaldo’s teammates at the time after being one of the few people allowed to watch Paris crush Barca – Madrid’s arch-rivals – in person last week.

Keylor Navas won the Champions League three times with Madrid during his spell at the club between 2014 and 2019, and the Costa Rica goalkeeper was happy to pose with Nurmagomedov and a shirt.

The smiling pair stood together by PSG’s team bus for a photo after the French champions’ resounding win in the first leg of the round of 16 tie at the Camp Nou.

Also on rt.com
‘Thank you so much’: Mbappe signs shirt for Khabib after UFC star sees PSG bash Barcelona in a Champions League disaster for Messi