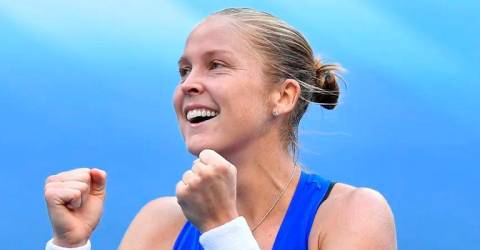 ADELAIDE: Unseeded American Shelby Rogers (pix) stunned third seed Johanna Konta with a display of raw power in the second round of the Adelaide International on Tuesday.

Rogers served superbly and was ruthless with her returns to see off the British star 6-2, 6-2 in just 76 minutes.

The 28-year-old Rogers has been in good form in Australia, reaching the fourth round of the Australian Open last week before falling to world number one Ash Barty.

She broke Konta’s first service game and was never troubled after that, breaking the former world number four twice in each set to run out a comfortable winner.

“I started the match really well with a quick break and I just kept the momentum going,” Rogers said.

“I knew I had to bring my best game tonight for Jo because she’s got an incredible game.

“She can pretty much serve you off the court when she wants to, so I was very happy with my return game tonight.”

There were no problems for the three other seeded players in action, all playing their first round matches.

Martic came back from losing the first set to Russia’s Liudmila Samsonova to win 4-6, 6-0, 7-5, while Putintseva beat Laura Siegemund in straight sets 6-4, 6-4.