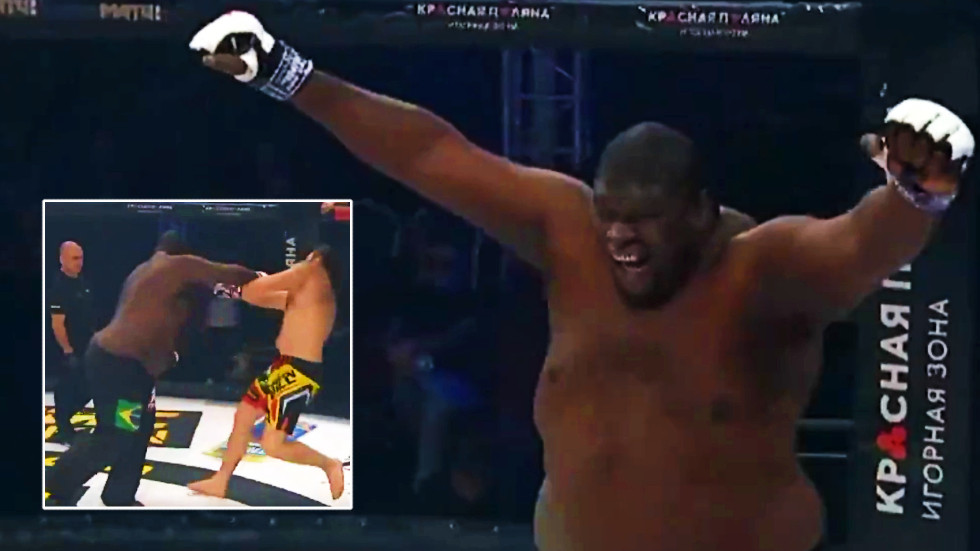 Huge MMA cult hero Zuluzinho, a 6ft 6in, 400lb Brazilian who once fought the likes of Fedor Emelianenko, sank to the canvas after landing a shot that he thought had ended a bout – only to receive bad news on his return in Sochi.

Menacing giant Zuluzinho, who took on feted Emelianenko during his prime with Pride Fighting Championships more than 15 years ago, surprised some unsuspecting fans by making a return to MMA for his first fight since 2019 on Tuesday, looking massive against Russian opponent Yusup Shuaev.

Now 42, man mountain Zuluzinho clubbed the game Shuaev to the floor with a shuddering shot just as the first round ended, racing away before lying on his back to savor what he assumed had been a dream comeback.

Unfortunately for the fighter once known as “Little Zulu”, the referee had only stepped in because the bell for the end of the round had gone, allowing shaken Shuaev to begin to regroup while his gigantic adversary mistakenly celebrated.

Zuluzinho just had his three fight win streak snapped in a majority decision loss to Yusup ShuaevZuluzinho thought he’d won the fight when he knocked Shuaev down at the end of the first, but was told after celebrating that the round had ended.

With some reporters observing that his “butt crack was peeking” out of his black tracksuit trousers, Zuluzinho fought on to a majority defeat against the unbeaten Shuaev, bringing the veteran’s run of three successive wins to a close.

Last seen at the Russian Slapping Championships last year, Zuluzinho proved as entertaining as ever to his many fans despite his defeat.

I’m so sad he didn’t win. This is the happiest I’ve ever seen a human

I’m guessing the adrenaline dump from this probably sapped his already limited gas tank. Surprised he even reached a decision.

I love boxing, kickboxing, muay thai, everything. But in terms of unintentional comedy, nothing compares to MMA

“I’m so sad he didn’t win,” rued one viewer after the final bell at the Wow Arena in Sochi, before adding of the moment when Zuluzinho was on the cusp of victory: “This is the happiest I’ve ever seen a human.”

Others marveled at the 35-fight jiu-jitsu specialist’s bravery and longevity, with some admitting that they had been unaware he was still a competitor.

Wait a second. Is that the same Zuluzinho?? Had no idea he was still around. How the hell did I miss this???

“I had no idea he was still around,” said one, while another enjoyed the unintentionally hilarious conclusion to the opening round and declared: “What a sport.”

Some fans protested to organizers Fight Nights Global after Shuaev reached the semifinals of the Bolshe-Kruche heavyweight grand prix, telling the promotion that Zuluzinho had won.

“You were robbed,” wrote one on Zuluzinho’s Instagram page, where he has more than 18,000 followers and describes part of his job as “giving slaps in the face”.

Featuring on a card in Russia for the first time since 2008, Zuluzinho went the distance in a fight for only the second time in his 18-year, 14-win professional career.

He had a shorter outing when he faced Emelianenko on a Pride FC card in Japan in 2005, suffering a TKO defeat in just 26 seconds.