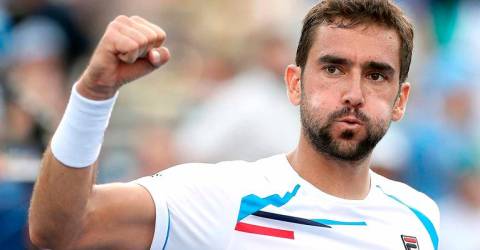 SINGAPORE: Croatia’s Marin Cilic (pix) swept aside Japan’s Taro Daniel in straight sets 7-5, 6-4 to advance to the quarter-finals at the Singapore Open.

Third seed Cilic, who received a bye in the first round, ended a four-match losing streak since November to remain on course for his 19th ATP singles title.

The 2014 US Open champion raced to a 3-1 lead after holding serve but an unforced error from Cilic’s backhand handed Daniel the break, bringing the match back level to 4-4.

A perfectly timed backhand winner then gave Cilic three set points before he closed out the opening set 7-5 in 55 minutes.

Serving for the match at 5-4 in the second set, Cilic fired a big unreturned serve and two consecutive aces to give himself three match points. He went on to close the match with a forehand winner on his third match point.

“It’s the beginning of the season and obviously still feeling a little rusty. But it was important to compete well today. It was a job well done and a result that I definitely needed for the start of the tournament,” said Cilic.

Kazakhstan’s Alexander Bublik will also head into the quarterfinals after cruising to a 6-2, 6-2 win over Turkey’s Altug Celikbilek.

In the other singles matches, Italy’s Roberto Marcora beat Latvia’s Ernests Gulbis 7-5, 6-4 while Bulgarian wildcard Adrian Andreev was dumped out by Australia’s Alexei Popyrin after losing 1-6, 7-5, 3-6.

Organisers meanwhile announced that up to 250 fans a day will be allowed to watch the weekend’s semifinals and finals in person.

All spectators must take a mandatory Covid-19 test and will only be allowed into the venue if their result is negative. They must wear masks at all times and will not be allowed to mingle between groups. – AFP