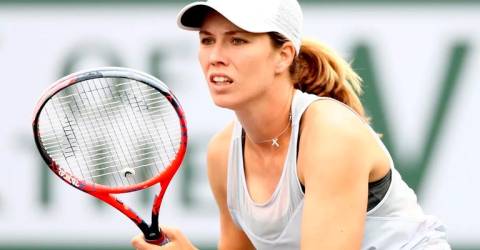 ADELAIDE: Unseeded American Danielle Collins (pix) sent an out of sorts Ashleigh Barty crashing out of the Adelaide International in the second round on Wednesday.

Collins seized on some poor serving from the world number one to claim a convincing 6-3, 6-4 win in just 65 minutes.

It was Collins’ first win over Barty in three encounters and her first win against a current world No. 1.

Barty started strongly, breaking Collins’ first service game and opening up a 3-1 lead, but the Australian’s first serve deserted her and Collins got back on terms, then broke Barty twice to claim the first set.

Barty broke again at the start of the second, but once again Collins came back, then broke at 4-4 before holding her own serve to reach the quarterfinals, where she will play Poland’s reigning French Open champion Iga Swiatek.

“I didn’t have the crowd on my side today but I still loved playing in front of so many fans. It just makes it such a fun atmosphere.”

Second seed Belinda Bencic cruised into the quarterfinals with a 6-1, 6-3 win over Japan’s Misaki Doi.

The Swiss world No. 12 dominated throughout to reach her first quarterfinal since Doha in February 2020.

“I felt really good on the court,” Bencic said.

“It’s only my second time in Adelaide but I love this tournament, I feel very comfortable here and it was nice to play in front of the crowd.

“I’m just really happy to be in another quarter-final, and hopefully I can win this time.”

The left-handed Sanders entered the tournament as the world No. 292 but outlasted seventh seed Yulia Putintseva in three sets 6-4, 5-7, 6-1.

American teenager Coco Gauff caused an upset when she came from a set down to beat sixth seed Petra Martic of Croatia 5-7, 6-3, 6-4.

McHale was a late entry when fourth seed Elise Mertens withdrew with a shoulder injury. – AFP