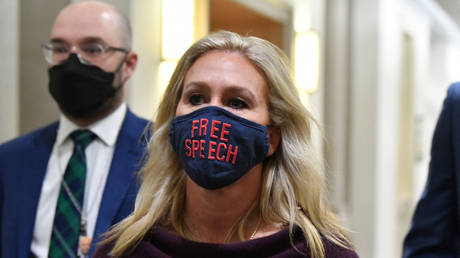 Republican Congresswoman Marjorie Taylor Greene has struck back against Democrat Rep. Marie Newman, planting a sign reading “there are two genders” outside Newman’s office after a trans rights flag went up outside her own.

In a speech to the House on Wednesday, Greene (R-Georgia) vocally opposed the Equality Act, a bill that would modify the Civil Rights Act to make “sex, sexual orientation, [and] gender identity” protected classes. Opponents say this designation would lead to transgender women being allowed to compete against biological women in sports, male inmates being housed with female ones in prison, and religious businesses being forced to serve LGBTQ customers against their will, among other concerns.

Greene’s speech clearly ticked off a few Democrats, among them Illinois Rep. Marie Newman, who shares a hallway with Greene in the Longworth House Office Building. In a move cheered by liberals and decried by conservatives as a “moronic stunt,” Newman erected a transgender pride flag outside her office, “so she can look at it every time she opens her door.”

Not one to leave a petty stunt unanswered, Greene struck back later on Wednesday night, hanging a sign reading “There are TWO genders: male & female” outside her own office. “Trust the science,” read the sign’s bottom line, aping the popular liberal mantra.

Which flag was removed so that it could be replaced by the transgender flag for the sake of this moronic stunt?

The Republic of Transgender is an imaginary country. Take that flag down @RepMarieNewman, you look stupid! LARP somewhere else.

When Greene hit back, the shoe was on the other foot, and liberals raged at her for “wasting time with hate.”

Any doubt Marjorie Taylor Greene would post a “Whites Only Sign” outside her office door if allowed.

A dedicated supporter of former President Donald Trump, Greene’s electoral victory in November garnered significant media attention, due to her endorsement of several right-wing conspiracy theories. Among them was the ‘QAnon’ theory, whose proponents believed that Trump was waging a secret war against Satanists in the Democratic Party and intelligence agencies.

These fringe beliefs have made Greene a punching bag for Democrats, who have accused the GOP of becoming the “party of MTG,” and for moderate Republicans eager to return to the pre-Trump status quo. Eleven of these Republicans joined their Democrat colleagues in a vote to strip Greene of her committee assignments earlier this month, even after Greene renounced her fringe beliefs as “words of the past.”


Despite her protestations, the House is set to vote on the Equality Act later on Thursday. House Majority Leader Steny Hoyer told reporters on Wednesday that he expects every member of his party to back the legislation, along with a handful of Republicans. Though the bill will likely pass thanks to the Democrats’ slim majority in the House, it faces a more difficult path in the Senate, where it needs a two-thirds vote to reach President Joe Biden’s desk. With control of the upper chamber split 50-50 between Democrats and Republicans, a smooth passage is highly unlikely.