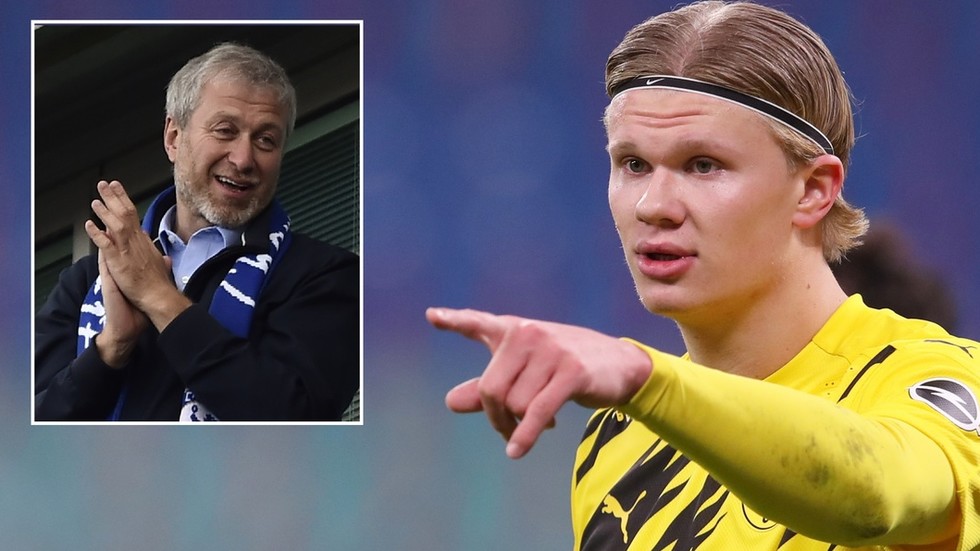 Chelsea owner Roman Abramovich has given the all-clear for his club to pursue prolific Borussia Dortmund forward Erling Haaland with the Norwegian sensation said to be a priority target this summer, according to reports.

Haaland, 20, continues to impress at Dortmund where he has bagged 27 goals in 25 appearances across all competitions this season.

That included a stunning scissor kick as part of a double in Dortmund’s 4-0 win at Schalke last weekend.

Haaland is one of the hottest properties in world football and is likely to be coveted by a host of big names across Europe when his relatively modest release clause – said to be €75 million (£65 million/$90 million) – is activated in the summer of 2022.

But rather than wait that long, it has already been reported that Chelsea are keen to steal a march on their rivals by bidding for Haaland this summer in the hopes that Dortmund will look to cash in on the star at a higher price.

According to Bild, Blues owner Abramovich has now personally sanctioned a move for Haaland as the Russian billionaire continues a spending spree which included an outlay of more than £200 million last summer on the likes of German duo Timo Werner and Kai Havertz.

Haaland’s agent, Mino Raiola, recently said that “everybody is looking” at the forward, who along with 22-year-old Paris Saint-Germain star Kylian Mbappe has been tipped to take over the mantle left by Cristiano Ronaldo and Lionel Messi as the world’s very best.

“Only a maximum of 10 clubs can afford to buy [Haaland] and give the platform you would like after you’ve been in Dortmund… and four of those clubs are in [England],” Raiola said.

READ MORE: ‘The torch has passed’: Fans convinced Mbappe vs Haaland is football’s next great rivalry after week to forget for Messi & Ronaldo

Should Chelsea make their move this summer, Haaland would likely not come cheap.

He is currently valued at north of €100 million, even in a climate where the Covid-19 pandemic has brought financial uncertainty at many of the world’s top clubs.

Manchester United, Manchester City and Real Madrid are among the other teams to be linked with the Norwegian ace, who has 18 Champions League goals to his name in just 13 appearances in the competition.

Also on rt.com
‘Could have just got Haaland’: Fans joke about ace after footage emerges of Chelsea chief Roman Abramovich’s new $605MN superyacht


Haaland could add a major piece to the jigsaw at Chelsea, where German former Dortmund boss Thomas Tuchel took over from the sacked Frank Lampard at the end of January.

Tuchel is attempting to get the best from Chelsea’s expensive summer recruits, not least young German duo Werner, 24, and Havertz, 21, who arrived for a combined fee of around £120 million.

Both have struggled to hit the ground running, although Werner has recaptured some of his form in recent weeks.


Tuchel guided his team to an impressive 1-0 win against Atletico Madrid in their Champions League last 16 first leg tie in Romania earlier this week, and the German is unbeaten in eight games thus far as Blues boss.

But according to shock claims this week, Tuchel might have even missed out on the job as former Blues manager Maurizio Sarri was said to be close to making a comeback after Lampard’s sacking.

Italian journalist Ciro Venerato has claimed that Chelsea director Marina Granovskaia argued the case for Sarri to return before the idea was blocked by Abramovich.

That speculation, however, have been rubbished by a number of UK-based reporters close to the club.