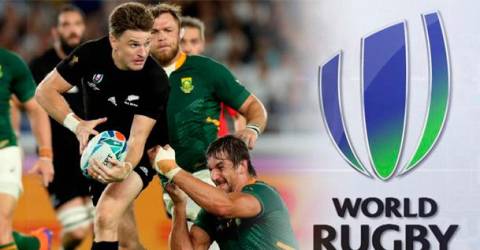 PARIS: New Zealand will dive straight into the deep end when they open their bid for a fourth World Cup title against hosts France in the opening game of the 2023 tournament, according to the fixture schedule revealed Friday.

The All Blacks, champions in 1987, 2011 and 2015, face Les Bleus at the Stade de France in Paris on September 8, the first day of the gruelling seven-week tournament.

The final will be at the Stade de France on Oct 28.

New Zealand and France are in Pool A along with Six Nations whipping boys Italy and two qualifiers – one from the Americas and one from Africa – and are expected to comfortably make the quarterfinals.

The winner of the group will face the runner-up of Pool B, a tough section which features defending champions South Africa, Ireland and Scotland.

The All Blacks have met France seven times at the World Cup, the most of any country, and Italy five times, with the 2019 match in Japan cancelled because of Typhoon Hagibis.

“It’s going to be a massive occasion playing France in the opening match of the tournament,” said All Blacks captain Sam Cane.

“Matches between our two sides have been some of the most celebrated games in our history, so it’ll be fantastic to meet them once again.

“Italy have also been a regular opponent at Rugby World Cups for us and it was a shame our match in 2019 was cancelled, so it’ll be great to play them again.”

New Zealand beat France in the final of the inaugural competition in 1987 and again 8-7 in the 2011 final, both of which were played in Auckland.

The French can boast two wins over the triple world champions at the tournament – 43-31 in the 1999 semifinals, one of the greatest comeback wins in World Cup history, and 20-18 in the last eight in 2007.

“It’s the Holy Grail as a player to play a World Cup at home and start against the New Zealanders,” said France fly-half Romain Ntamack whose father Emile played in the 1999 classic.

“To start against the best team ever, it doesn’t get better. We’ll all be thinking long and hard about it right up to kickoff.

“We will inevitably have a little knot in the stomach when playing this match but we will have to take full advantage of it because it will perhaps be one of the most beautiful matches of our life.”

New Zealand hold the overall advantage with a 48-12 record with one draw over the 61 Tests played between the two since the ‘Original’ All Blacks ran in 10 tries to beat France in their very first international 38-8 at the Parc des Princes in Paris on January 1, 1906.

“France v New Zealand, I’ve been dreaming of it since I started working on the World Cup. The best possible match, we’ll have it on the first day. It will allow us to start the competition, to provide a benchmark of attractiveness,” Claude Atcher, director general of the organising committee, told AFP.

“Without insulting our Italian cousins, it will be difficult for Italy to challenge these two teams for second place in the pool.”

South Africa start their defence against Scotland on Sept 10 at Marseille’s Stade Velodrome.

The team of Cheslin Kolbe and Siya Kolisi face Ireland on September 23 at the Stade de France.

Ireland and Scotland meet also in Paris on Oct 7.

England, the 2003 world champions, begin their Pool D campaign against Argentina in Marseille on Sept 9, the second day of the tournament.

Japan, also in Pool D, start in Toulouse the following day against an America zone qualifier.

Pool C sees Wales and Australia as favourites to progress but they will be wary of the challenge of Fiji who they meet respectively on September 10 in Bordeaux and September 17 in Saint-Etienne.

“Each city hosts at least one of the teams which qualified for the quarterfinals in Japan in 2019,” said Atcher. – AFP