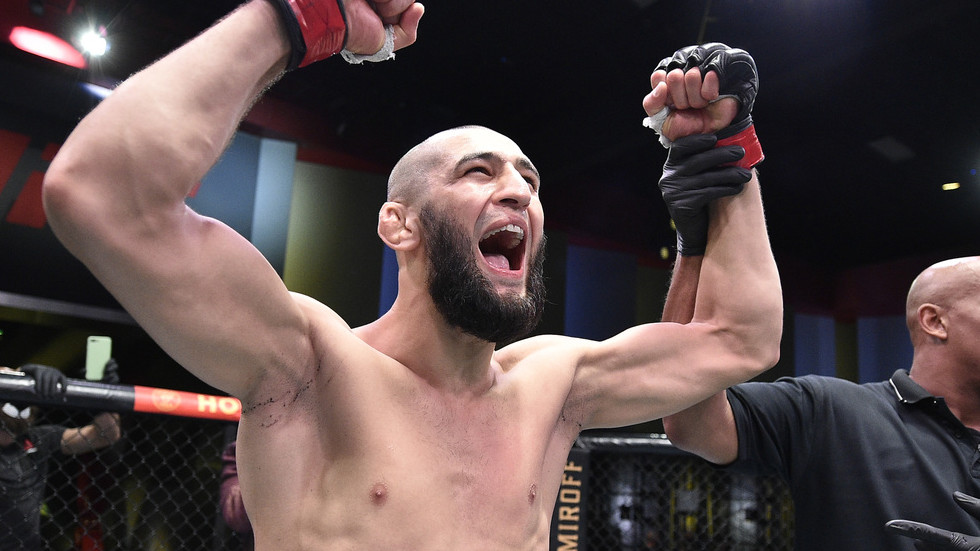 UFC sensation Khamzat Chimaev has signaled he is targeting a June octagon return, selecting welterweight rival Neil Magny as a potential opponent and thanking the UFC for their help in treating the lingering effects of Covid-19.

Chimaev was flown to the US earlier this month as he endured continued ill-health following a coronavirus infection.

Those struggles had already put paid to the Chechen-born star’s headline contest with Leon Edwards in Las Vegas on March 13, a fight which fell through for a third time due to Covid-related reasons.

Chimaev had returned to training earlier this year, although his manager later revealed the 26-year-old had “thought he was going to die” after struggling with the lingering effects of the virus.

Also on rt.com
Covid-hit UFC star Khamzat Chimaev ‘flying to US for treatment for lingering effects of virus, manager hopes he can fight by June’


But Chimaev has now signaled he is on the way back, posting a message of thanks to Dana White and the UFC for their care.

“[I] want to say thank you to @danawhite and @ufc. Give me medical treatment and taking care of me first class thank you and I’m very grateful see in June,” wrote the undefeated star on Instagram, along with a selfie featuring a smiling Dana White.

A match-up with the number three-ranked Edwards might have gone begging, but Chimaev has already set his sights on the man he wants to face next.

Reviving an earlier Twitter spat with American welterweight Magny, Chimaev wrote on the platform: “Be ready in June I’m going to give you real Chechen [slap] inside the cage and outside.”

The number nine-ranked Magny lost his last appearance in January, when he was on the wrong end of a unanimous decision against Michael Chiesa.

That snapped a three-fight win streak for the 33-year-old UFC veteran, who stands 24-8 overall in his career.

Swedish star Chimaev exploded onto the UFC scene with three victories in the space of 66 days last year, improving his overall professional ledger to 9-0.

That momentum was halted by his battle with Covid, earning widespread sympathy from the MMA community.

However, one man who questioned Chimaev was American middleweight Kevin Holland, who claimed this week that Chimaev didn’t beat the virus sooner because he didn’t have enough “heart”.

Also on rt.com
‘Get the f*ck over it’: UFC’s Kevin Holland questions Covid-hit Khamzat Chimaev for ‘not having heart’