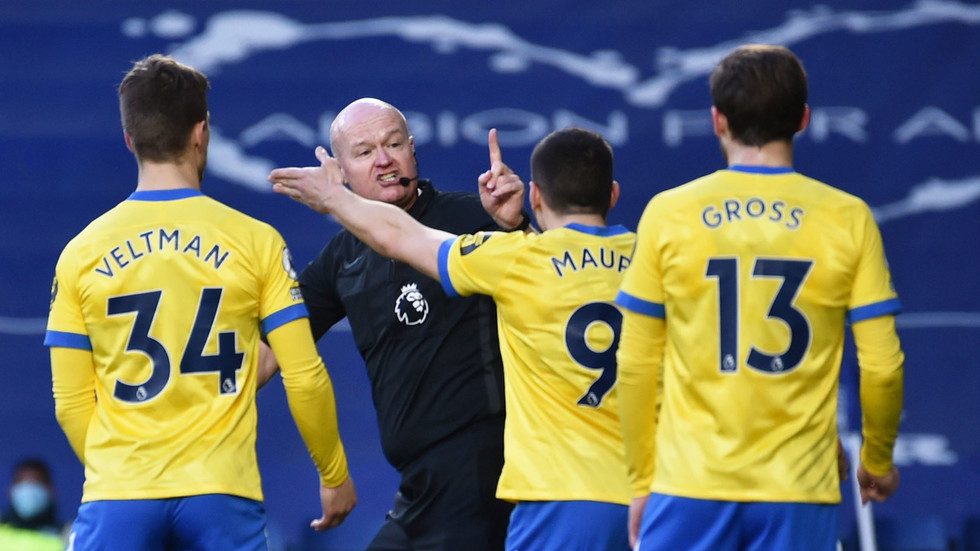 Referee Lee Mason has been slammed as a “f*cking disgrace” after he flip-flopped on a decision to award a goal after Brighton’s Lewis Dunk found the net with a quick free-kick in Saturday’s game with West Brom.

The opportunistic Dunk was quickest to react when his side was awarded a free-kick, curling an effort into the bottom right corner of the goal as Sam Johnstone attempted to fortify his defensive wall.

Dunk’s smile soon turned to a frown as referee Mason opted to disallow the goal amid Brighton celebrations – before apparently changing his mind and awarding the goal.

However, Mason then opted to take the advice of the Video Assistant Referee (VAR), who subsequently ruled that the goal was to be officially disallowed.

According to reports from the Daily Mail, nearby players were heard referring to Mason as a “f*cking disgrace” and a “f*cking embarrassment” – but were not penalized for their outspoken critiques of Mason’s officiating.

The reason given as to Dunk’s effort being ruled out was that the referee blew his whistle to signal the taking of the free-kick, but blew it again before the ball cross the goal-line – effectively stopping play once again.

But somewhat predictably, and amid the ongoing concerns in some quarters as to VAR’s influence on the English game, many football fans and figures within the sports have taken to social media to express their confusion at what they see as the renegade refereeing on show at the Hawthorns on Saturday afternoon.

The reason it was disallowed was because the ref blew his whistle for a 2nd time just before it crossed the line, which stops play. Never seen that happen before but highlights the nonsensity of a law that stops the side who’ve been fouled gaining an advantage.

British broadcaster Jeff Stelling of Sky Sports branded the confusing episode as “disgraceful“, saying on Saturday’s episode of ‘Soccer Saturday’ that the incident was “a total, utter, shameful, disgraceful, piece of nonsense.

“How can he award the goal after somebody’s told him that “you did whistle”? Doesn’t he know whether he whistled or not? I have never seen anything, anywhere, like this,” he added.


Lee Mason, meanwhile, once again finds himself at the center of a Premier League controversy after previously being criticized by Wolves boss Nuno Espirito Santo for the standard of his refereeing.

“The referee doesn’t have quality to whistle a game in the Premier League,” claimed the Portuguese head coach after a prior contentious incident on the pitch after he said that Mason was too quick to blow his whistle upon pressure from players.

The incident again places further strain on the standard of VAR officiating in the Premier League after it has been cited as being an officious and stifling influence on the game since it was introduced in England.