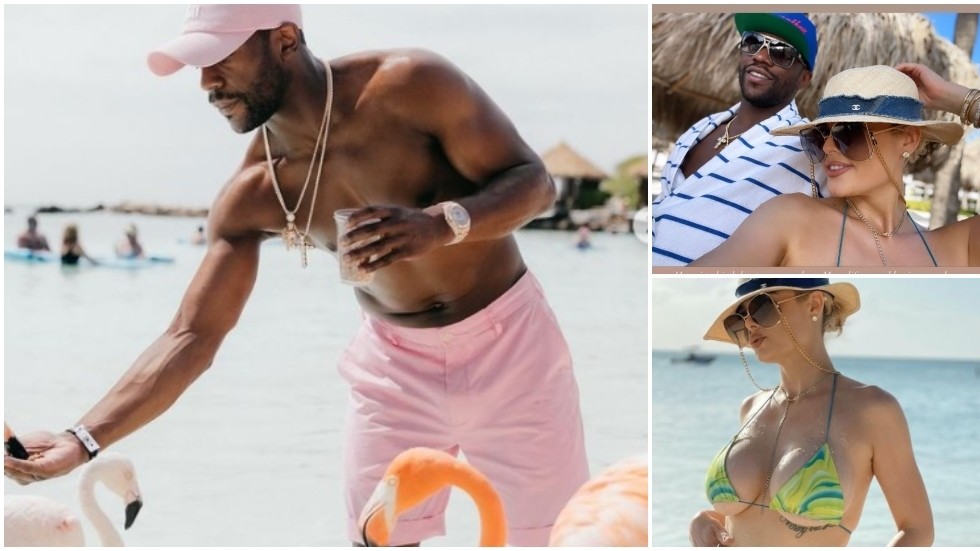 Undefeated boxing great Floyd Mayweather has been photographed feeding flamingos as he shared a sunshine break in Aruba alongside his supposed new girlfriend, Anna Monroe.

The ring legend celebrated his 44th birthday on the Caribbean island where he was photographed feeding flamingos on a beach while dressed in matching pink shorts and a baseball hat.

True to form, the man nicknamed ‘Money’ took the opportunity to show off some of his ‘bling’ as he was wearing one of his expensive collection of watches – as well as TWO gold chains.

The 50-0 retired boxer had previously stated that he brings one of his diamond-encrusted timepieces for EACH DAY of his planned vacations.

Furthermore, the enigmatic Mayweather has got the Internet into a frenzy after it was reported that Anna Monroe – purportedly an employee at one of his Girl Collection strip clubs – had joined him in Aruba for his birthday festivities, adding further fuel to rumors that the two are engaged in a relationship.

Reports online indicate that Mayweather and Monroe have been dating since New Year’s Day, with the boxer said to have introduced Monroe to his friends – including rapper Rick Ross – at his first birthday bash in the United States last week.

“Floyd introduced Anna to all of his friends as his ‘Princess’,” an unnamed source was quoted as saying by The Sun.

“He was really keen to show her off and Anna was proud to be by his side at the party. Their relationship is getting more and more serious. Introducing her at such a big event like that takes things to the next level.“

Further reports also indicate that Mayweather is keen to travel to the United Kingdom as soon as he is able to in order to meet Monroe’s family and friends.

Speculation as the extent of their relationship was raised when the pair posted separate photographs to Instagram from the same locations, and at the same time.

Monroe also shared a post with Mayweather, wishing her ‘love’ a happy birthday.

Mayweather, meanwhile, is scheduled to fight YouTube sensation Logan Paul in an exhibition boxing match this year after their initial February 20 date was postponed.