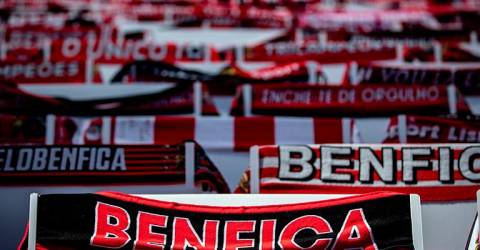 BENFICA: When Pierre-Emerick Aubameyang headed in Arsenal’s third goal late in their Europa League last-32 meeting, there was a look of resignation about Benfica’s players.

They meekly surrendered and once again went out of Europe with a whimper. With February not even up, their season looks over and pressure is mounting on coach Jorge Jesus.

Since losing to Porto in the Portuguese Super Cup final in December, Benfica have won just six of 16 games in all competitions, being dumped out of the League Cup, Europa League and slipping to fourth in the league table – 15 points behind city rivals Sporting Lisbon at the top.

So, what has gone wrong at the Estadio da Luz?

It all started when former coach Bruno Lage left the club last June.

After leading a young side with a core of players from the club’s famed Seixal academy – where he had previously worked – to the title in 2019, they stuttered following the restart of football after it was paused due to the COVID-19 pandemic and missed out on the Liga title.

Instead of keeping the faith in his young players and pushing on, Lage left and veteran coach Jesus returned to the club.

Jesus, 66, won three league titles with Benfica between 2009 and 2015, and lifted the Copa Libertadores with Brazilian side Flamengo in 2019.

He is well-known, however, for his preference for tried-and-trusted, experienced players. That meant a change in philosophy and a different recruitment process at Benfica.

The Eagles adopted a scattergun ‘Galactico’ approach, shelling out more than €100 million on players such as Darwin Nunez, Everton, Nicolas Otamendi and Luca Waldschmidt.

Instead of taking Benfica to the next level, they lost their Champions League qualifier to PAOK and finished behind Scottish side Rangers in their Europa League group.

As the season progresses, Jesus’s methods look increasingly outdated. Younger coaches Ruben Amorim at Sporting and Sergio Conceicao at Porto are leaving him behind, and it might be time for Benfica to once again put their faith in youth. – Reuters