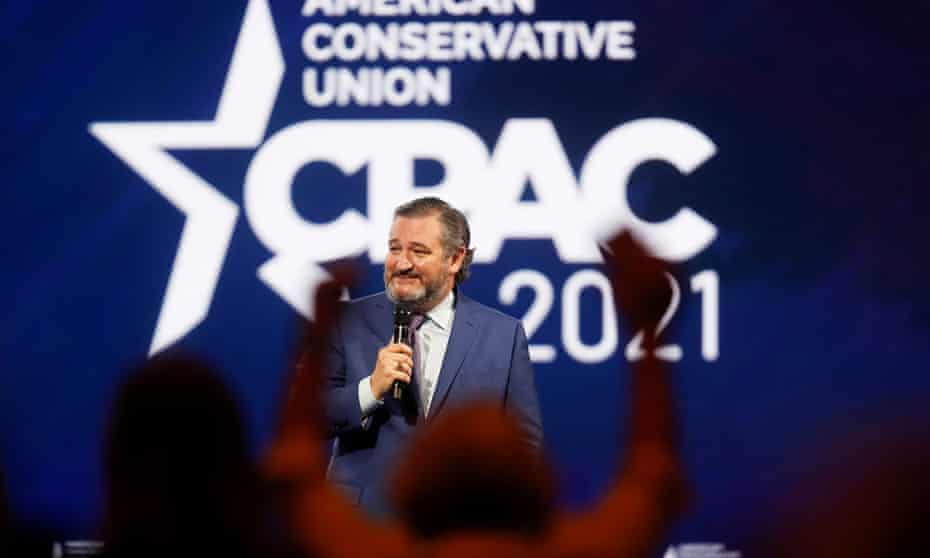 Amid the resurrection of “the big lie” about an election stolen from Donald Trump, another deceptive theme has emerged at this weekend’s rightwing gathering of the Conservative Political Action Conference: Republicans as the true party of the blue-collar worker.

It was a concept promoted variously over CPAC’s first two days by, among others, a multimillionaire former governor who made a fortune in healthcare; the son of Donald Trump, who lives in his own exclusive Florida club; and two firebrand US senators with law degrees from Ivy League universities who oppose a universal hike in the minimum wage to $15 an hour.

One of them, the Texas senator Ted Cruz, earlier this month flew his family to a sunshine vacation at a five-star resort in Mexico to escape the deadly winter blast back in his home state. At CPAC he asserted his alignment with America’s working men and women.

“The Republican party is not the party just of the country clubs; the Republican party is the party of steel workers and construction workers, and pipeline workers and taxi cab drivers, and cops and firefighters, and waiters and waitresses, and the men and women with calluses on their hands who are working for this country,” Cruz told the nation’s biggest annual gathering of grassroots conservatives, just days after cutting short his Cancun holiday when the scandal came to light.

“That is our party, and these deplorables are here to stay.”

The CPAC positioning to try to represent the Republican party as a champion of the working class comes as Democratic president Joe Biden’s effort to raise the minimum wage faces significant congressional roadblocks, including opposition from many senior Republican figures.

Cruz, a Harvard-educated lawyer and the beneficiary of substantial corporate campaign donations, at least until many halted contributions in the wake of the 6 January Capitol riots, is a long-time opponent of what he has called the “bad policy” concept of a minimum wage, and has said legislation to enforce it would “kill American jobs”.

“Where I come from in Missouri, I grew up in rural Missouri, [a] small town right in the middle of Missouri, it’s a working-class town full of good folks, working hard to make it every day,” said Hawley, a Yale law school graduate.

“And I can just tell you, where I grew up, we believe in citizenship because we’re proud of it. We’re proud to be Americans,” he added in an address condemning “powerful corporations” and “oligarchs” he accused of imposing a “radical left agenda” on the United States.

Hawley, considered a possible candidate in the race for the Republican Party’s 2024 presidential nomination if Trump does not run again, has also suffered corporate backlash for his support of the former president’s election lies. He proposed legislation this month that would exempt small businesses from paying their employees a “burdensome” minimum wage.

On Saturday at CPAC, the fealty continued to Trump, who was honored at the conference venue this week by the installation of a large, gaudy statue that sparked the Twitter hashtag #goldencalf.

“The blue-collar comeback was the theme of our administration,” the Republican Tennessee senator Bill Hagerty said in a panel discussion on industry during which he praised “President Trump’s leadership” for job growth.

KT McFarland, a conservative commentator who was briefly Trump’s deputy national security adviser at the start of his administration, said she had a telephone call with the former president on Friday night in which he allegedly outlined the theme of his scheduled CPAC speech on Sunday.

“I think that Donald Trump is not finished with this revolution,” she said, describing how she called his Mar-a-Lago resort in Palm Beach and claiming Trump himself picked up the phone.

Trump’s son, Donald Jr, told CPAC attendees earlier in the gathering that Biden’s relaxation of Trump-era immigration measures and reopening of camps for migrant youth would affect the very blue-collar workers Republicans are attempting to covet.

“Where is the outrage about an asinine immigration policy that is encouraging people to bring children unaccompanied and otherwise into a country?” he said.

“Guess who gets hurt? Our low-wage earners, who for the first time in modern history under Donald Trump started seeing real wage growth.”

Rick Scott, Florida’s junior senator and former governor, and a staunch Trump ally, cautioned Republicans that abandoning the ex-present would alienate the party’s base.

“We will not win the future by trying to go back to where the Republican party used to be. If we do, we will lose the working base that President Trump so animated,” said Scott, a former healthcare executive whose personal net worth has been estimated above half a million dollars.

Analysts say there is nothing unusual in Republicans courting the working vote, even if the choice of messenger might be questionable.

“From a scholarly perspective, we’re really watching what seems to be a realignment of the coalitions that are supporting each party, and particularly among working-class white individuals,” said Dr Susan MacManus, emeritus professor of political science at the University of South Florida.

“All you have to do is to go look at the exit poll for the presidential election and look at who are the largest supporters of Donald Trump, non-college educated, working whites, pretty much.

“Is there a disconnect between the wealth and education of leaders in both parties? Yes, but this is where it’s coming from.”