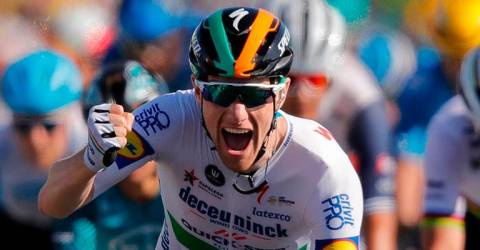 After Thursday’s possibly decisive 20km uphill finish the overall race leader Tadej Pogacar was able to take it easy on the run around Dubai, leaving the glory to the sprint specialists while he maintained his advantage finishing with the main pack.

The smiley Irishman, who cried after his first Tour de France stage win last season, can bag a hattrick of wins Saturday on the seventh and final stage which also looks perfect for his strengths.

The 30-year-old said he would certainly go for it.

“We’re pretty much nailing it at the minute,” said Bennett.

“I really want stage seven and we’ll for sure go for it again on Saturday.”

“That’s another day gone by,” the Team UAE leader Pogacar said. “It was quite hectic with the wind in the middle of the race but we managed to stay all together. I hope tomorrow is a similar day.”

The 130-strong peloton headed into strong winds Friday with the temperature at 25 degrees Celcius for the 165km run around Dubai.

Four-time Tour de France winner Chris Froome failed to finish with the main pack and crossed the line 2min 27sec down on the day.

“I feel stronger every day,” Froome said Thursday of his bid to get up to speed after coming to Dubai straight from rehab in California.

The 35-year-old insists he was not here to win but to start his preparations for the Tour de France in June.

He is 41st in the overall standings here, 19min and 5sec behind Pogacar. – AFP