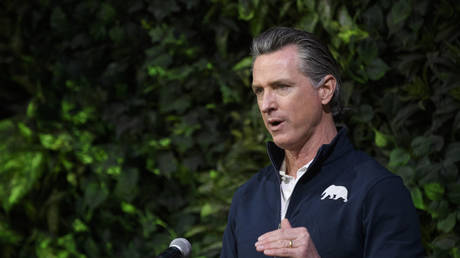 Embattled California Democrat Governor Gavin Newsom has been accused of once again breaching his own coronavirus restrictions after he was allegedly caught dining indoors.

Newsom himself posted a video with comedian George Lopez to his TikTok aimed at promoting how citizens can check their coronavirus vaccine eligibility. The video was taken inside the Los Amigos restaurant in Fresno, which is under the state’s strictest lockdown restrictions, complete with a ban on indoor dining.

California Governor @GavinNewsom on video inside a restaurant in Fresno which is closed because of his onerous restrictions.In November, Newsom was caught dining at the French Laundry restaurant indoors and unmasked in violation of his own restrictions pic.twitter.com/FJN43TgMxl

A spokesperson for Newsom claimed he was there to meet with the owner to discuss their relief grant and denied that the governor had dined. Despite this, allegations were made online that not only did Newsom stay for over an hour, but ate there as well, once again contravening his own Covid-19 restrictions.

“He’s really rubbing it in people’s faces. Chances are slim he’ll be recalled. Still a garbage human being,” wrote one clearly irritated commenter.

He strives to meet the lowest of our expectations.

“They were having a meeting with the owner, not dining. He’s allowed to be inside for a meeting,” wrote one Twitter user, rushing to Newsom’s defense.

Newsom was previously caught breaking his own ban on indoor dining back in November when he held a dinner with friends at the prestigious French Laundry restaurant in Napa. Among his fellow diners was a member of the California medical advisory board.

Opponents have begun a concerted effort to have Newsom recalled as governor of California for his perceived mishandling of the coronavirus pandemic.

Newsom’s lockdowns have placed significant hardship on small businesses, forcing many restaurants and mom-and-pop shops to close down, though Hollywood productions were spared any imposition.


Meanwhile, some 1.8 million signatures have been collected on a petition calling for the governor’s recall. Many are expected to be discounted, however, so efforts by Newsom’s opponents to accrue even more verified signatures to meet the required 1.5 million needed by March 17 continue, in order for the recall effort to proceed further.