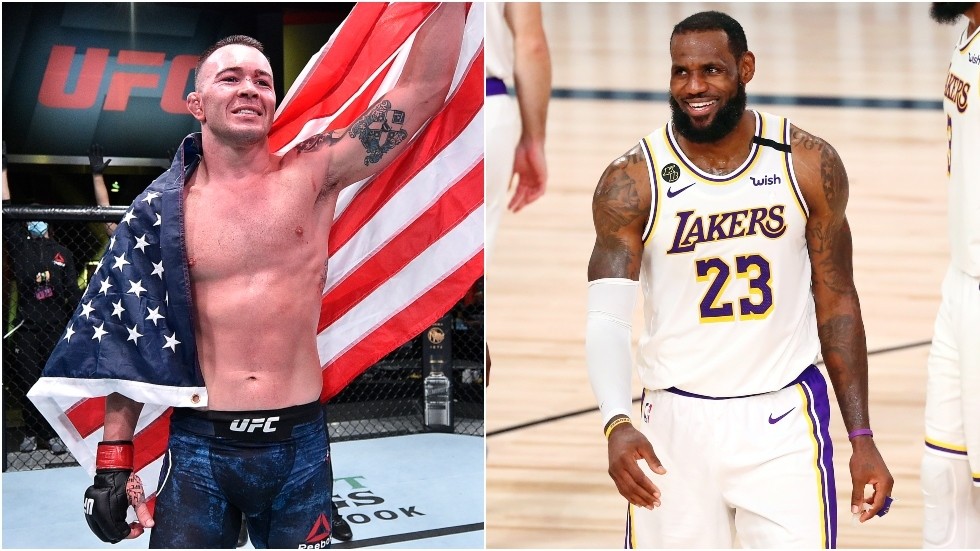 UFC welterweight Colby Covington has branded LeBron James a ‘Chinese finger puppet’ as the fighter weighed in on the row which kicked off when football star Zlatan Ibrahimovic criticized James’ political activism.

Swedish star Zlatan said in an interview this week that James should “stay out of politics” and “just do what you do best.”

That prompted the LA Lakers icon to vow that he would “never shut up about things that are wrong” and would never “just stick to sports.”

Also on rt.com
LeBron vs Zlatan: Please, spare us this clash of overinflated egos


UFC fighter Covington – a Donald Trump superfan and long-time critic of James – has now offered his take on the row, unsurprisingly coming out swinging against the four-time NBA champion.

When are you gonna speak up about Hong Kong @KingJames? Oh that’s right, you can’t. You’re a Chinese finger puppet! You make millions playing a kids game & talk about “social justice” but have no problem paying Chinese women in sweatshops pennies to make your products. Slimeball. https://t.co/nPhD5OQEOC

“When are you gonna speak up about Hong Kong?” Covington wrote, tagging James and sharing a tweet of his riposte to Ibrahimovic.

“Oh, that’s right, you can’t. You’re a Chinese finger puppet! You make millions playing a kids game and talk about ‘social justice’ but have no problem paying Chinese women in sweatshops pennies to make your products. Slimeball.”

The ‘Hong Kong argument’ has been used frequently against James amid his spat with Ibrahimovic.

The basketball star was accused of remaining silent back in 2019 when the NBA was dragged into a row over anti-government protests in Hong Kong.

After Houston Rockets general manager Daryl Morey had tweeted the slogan “Fight for Freedom. Stand with Hong Kong” – potentially endangering the NBA’s lucrative ties with China – James said that Morey had been “misinformed” and “not educated.”

That earned the basketball star opprobrium in some quarters for seemingly putting profits above principle, as his sponsors Nike also generate billions of dollars in sales in China.

Also on rt.com
‘I speak from an educated mind, I’m the wrong guy to go at’: LeBron returns fire at Zlatan after being told to stick to sports


An avowed MAGA supporter, Covington has never previously held back against James, even calling him out for a fight.

Back in December, the 33-year-old UFC star said he would make James “eat the canvas,” while earlier last year he labeled James a “spineless coward” in a diatribe against the Black Lives Matter movement.

After Covington’s latest broadside, some fans reignited calls for a showdown between the pair.

However, some claimed Covington was the one guilty of hypocrisy for wearing clothing that was also made in China, while others said it was merely a desperate ploy for Covington to “stay relevant” now that his hero Trump had left the White House.

Lebron not Chinese or from Hong Kong last I checked. And everybody stuff is made in China. Including your FAV. 🤡

You will say anything to stay relevant. Lebron will never know who you are.

Former UFC interim welterweight champion Covington stands 16-2 in his MMA career, and finished Tyron Woodley in the fifth round of their contest during his last octagon appearance in September.

Covington turned much of his media work surrounding that fight into an opportunity to attack BLM, calling Woodley a “terrorist sympathizer” and “woke little b*tch” over his support for the movement.