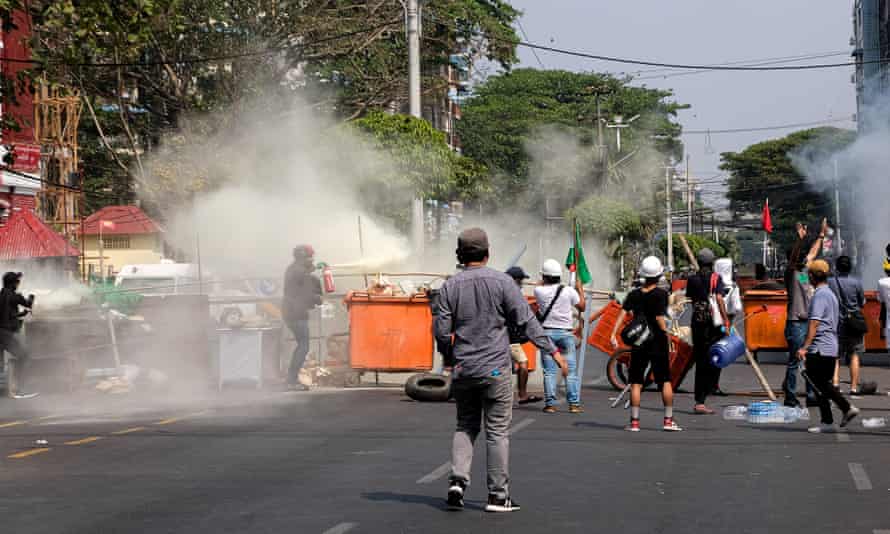 One protester has been killed and several others injured after police in Myanmar fired stun grenades, tear gas and live rounds at demonstrators, according to local media, as the military junta intensified its attempts to quell a backlash against this month’s coup.

Several bloodied people were seen being helped away from protests in the main city of Yangon in images posted by media outlets, but it was not clear if they were hurt by rubber bullets or live fire.

The Myanmar Now media group said people had been “gunned down” but it did not elaborate. It tweeted images of a man that it said had been shot in the chest before being carried away by other protesters. Reports on Saturday that a woman had been killed by police fire were later corrected to say that she was still alive.

The action to stamp out the protests came after state television announced that Myanmar’s UN envoy had been fired after he urged the United Nations to use “any means necessary” to reverse the 1 February coup that ousted elected leader Aung San Suu Kyi.

Myanmar was thrown into chaos when the army seized power and detained Aung San Suu Kyi and much of her party leadership, alleging fraud in a November election her party won in a landslide.

The coup, which stalled Myanmar’s progress toward democracy after nearly 50 years of military rule, has brought hundreds of thousands of protesters onto the streets and drawn condemnation from western countries, with some imposing limited sanctions.

Police were out on the streets in force again at a main protest site in the city of Yangon early on Sunday as hundreds of protesters, many clad in makeshift protective gear, began to congregate, a witness said.

Police moved swiftly to break up groups as crowds gathered near the Hledan Centre intersection, which has become the gathering point for protesters who then fan out to other parts of the city.

“Police got out of their cars and started throwing stun grenades without warning,” said Hayman May Hninsi who was with a group of fellow teachers in Yangon. They fled to nearby buildings.

“Some teachers got hurt running. We’re assessing the situation and whether to go out again or not.”

Doctors and students in white lab coats fled as police threw stun grenades outside a medical school in another part of the city, posted video showed. In the second city of Mandalay, officers fired guns into the air, trapping protesting medical staff in a city hospital.

Police and the spokesman for the ruling military council were not available for comment.

Saturday saw turmoil in towns and cities across the country as police moved forcefully to stamp out the protests, firing tear gas, setting off stun grenades and shooting guns into the air.

State-run MRTV television said more than 470 people had been arrested in all. It said police had given warnings before using stun grenades to disperse people.

Several journalists were among those detained, their media organisations and colleagues said.

“We’re fighting to end this military bullying which has been going on for generation after generation.”

One woman was shot and wounded in the central town of Monwya, 7Day News and an emergency worker said. 7Day and two other media organisations had earlier reported that she was killed.

General Min Aung Hlaing, leader of the military junta, said authorities have been using minimal force. Nevertheless, at least three protesters have died over the days of turmoil. The army says a policeman has been killed in the unrest.

Saturday’s violence came after Kyaw Moe Tun told the UN general assembly he was speaking on behalf of Aung San Suu Kyi’s government and appealed for help to end the coup.

MRTV television said he had been fired in accordance with civil service rules because he had “betrayed the country” and “abused the power and responsibilities of an ambassador”.

However, the United Nations has not officially recognised the junta as Myanmar’s new government.

UN special rapporteur Tom Andrews said he was overwhelmed by the ambassador’s “act of courage”, adding on Twitter, “It’s time for the world to answer that courageous call with action”.