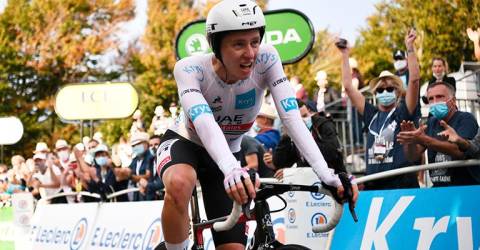 The 22-year-old Pogacar dominated the race to turn the tables on Briton Adam Yates, who had edged the Slovenian in last year’s coronavirus-curtailed edition of the World Tour event.

“This is really big,” said Pogacar who gave his UAE state-sponsored team a second success in their home race, four years after it was won by Portugal’s Rui Costa.

“It was my first goal of the season and my first home race, so it was really important and I’m super happy…This is one of our best achievements.”

In the closing stage, Team Ineos’ Yates fell 40 kilometres from the line, but climbed back on his bike to rejoin the peloton.

Up front, Lotto rider Ewan pounced and passed Sam Bennett in the shadow of the finish to deny the Irishman a third stage win this week.

“We came here to win a stage and there was only one more left to take,” said Ewan, who had claimed his first win of the season.

“It was a bit of a relief when I crossed the line. I haven’t been this far into the year without a win in my whole career.” – AFP