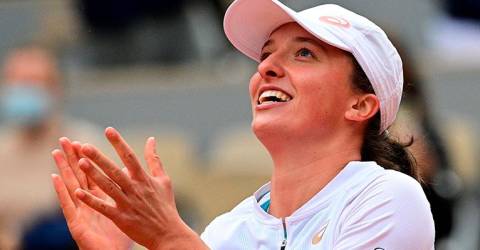 ADELAIDE: French Open champion Iga Swiatek has joined a growing list of top players pulling out of the Qatar Open, with the Pole saying she wanted to avoid injury after winning the second title of her career at the Adelaide International on Saturday.

World No. 1 Ash Barty on Wednesday withdrew from the March 1-6 tournament in Doha with a left leg injury, while world No. 3 Simona Halep and 2019 US Open winner Bianca Andreescu are also skipping the event.

“Yesterday we decided… that we’re going to withdraw from Doha because of some intense weeks here,” Swiatek, who played a warm-up in Melbourne before this month’s Australian Open, said after beating Belinda Bencic 6-2 6-2 in the Adelaide final.

“I don’t want to have injury or anything. I want my body to rest properly.” Swiatek is also scheduled to compete in the Dubai Duty Free Tennis Championships next month. – Reuters