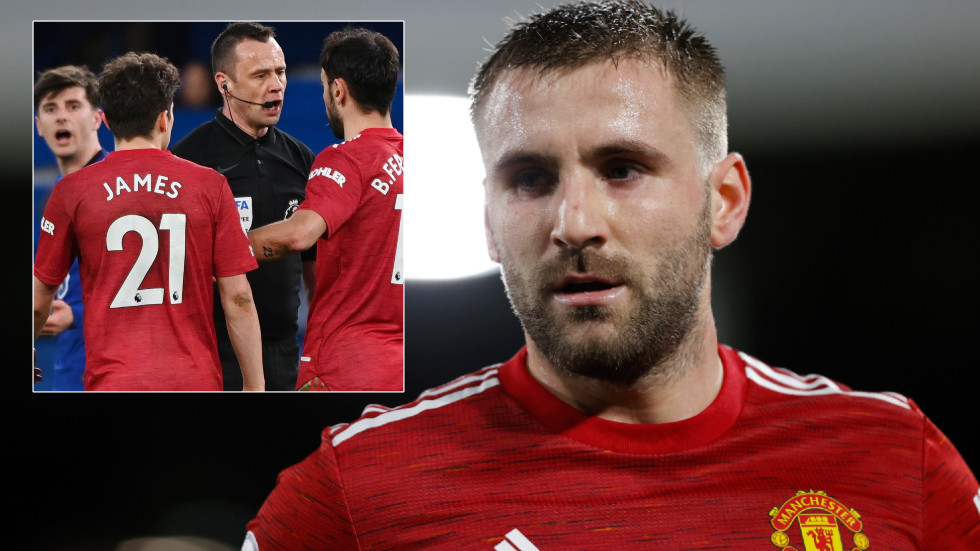 Luke Shaw could be banned by the Premier League after he accused the referee who shunned Man United’s penalty claim against Chelsea of malpractice – but Harry Maguire has admitted his fellow defender misheard the conversation.

United were unlucky not to be awarded a spot kick in the first half of Sunday’s stalemate against Thomas Tuchel’s re-energized Chelsea team after the ball appeared to strike Callum Hudson-Odoi’s hand as be battled for possession with Mason Greenwood.

Following a brief delay in which both the VAR and referee Stuart Attwell considered and ultimately denied the penalty claim, full-back Shaw has landed himself in hot water for critical comments after the game in which he alleged that he overheard Attwell telling skipper Maguire that if he gave the penalty, it would lead to unending debate in the press.

“The ref even said to [Harry], if it’s a pen it’s going to cause a lot of talk after. So I don’t know what happened there,” Shaw told Sky Sports.

Luke Shaw could face an FA charge and possible ban because of this comments about the ref at Stamford Bridge??Only United could not get a penalty we should have, but also end up with one of our own players banned because of it. FFS.

Shaw’s allegations were repeated moments after the game by United manager Ole Gunnar Solksjaer in an irate interview, who admitted that he was reining in his reaction for fear of reprisal from the Football Association.

“One hundred per cent,” he blasted, when asked if a penalty should have been given. “They’re shouting it’s handball for our player but when you look at it on the video, it’s taken two points away from us.”

🗣 “It’s all these outside influences, it’s cheeky when they put that on their website, that’s influencing the referees. You can read it.” 😡 Ole Gunnar Solskjaer vents his frustrations about the penalty that wasn’t given pic.twitter.com/7YK22ja6Oo

Ole Gunnar Solskjær complaining about not getting enough penalties, or decisions in United’s favour…Since he took over as United manager in 2018, they’ve been awarded 42 penalties, in all competitions. The PL average in that time, was 13.1.Hilarious. pic.twitter.com/MW8y3KDayy

The furious Norwegian boss also stated that Chelsea had potentially attempted to “influence officials” by hosting an article on their website citing an incident between Maguire and Chelsea skipper Cesar Azpilicueta in the reverse fixture earlier this season.

Those complaints changed hours after the game, when United and Shaw backtracked on the alleged contents of the discussion between Maguire and Attwell and announced that Shaw had “misheard” the conversation – withdrawing any accusations of impropriety.

The about-face may not save Shaw from a ban amid FA regulations against players who “imply bias or attack the integrity [of officials].”

The former England defender should learn his fate by Wednesday of this week, as rules dictate that the FA has three working days in which to make a decision.

Also on rt.com
‘F*cking disgrace!’: Fury as Premier League referee disallows goal, then allows it, before ruling it out AGAIN (VIDEO)