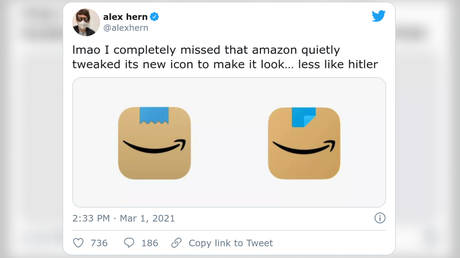 Amazon quietly changed the design of its app logo after social media users claimed the image of a box with tape on it bears a resemblance to Nazi Germany’s dictator, Adolf Hitler.

The original logo, which Amazon rolled out in January, was meant to portray a brown Amazon box with a piece of jagged tape above the company’s iconic smile icon. The combination of the smile and tape, however, ended up vaguely resembling Hitler’s infamous toothbrush moustache.

Amazon’s revised version of the logo has ditched the jagged tape for a more square piece of tape with a folded corner.

It is not known when Amazon changed the logo, but social media users started to notice the change last week, with most media outlets finally clocking it on Tuesday.

The company told the Verge in a statement that it is “always exploring new ways to delight our customers,” and “designed the new icon to spark anticipation, excitement, and joy when customers start their shopping journey on their phone, just as they do when they see our boxes on their door step.”

Amazon’s app design wasn’t the only Hitler-related controversy the company experienced recently. After it banned books that it alleged promoted “hate speech” last month, including a conservative book on transgenderism, social media users questioned why it was still selling copies of Hitler’s Mein Kampf.