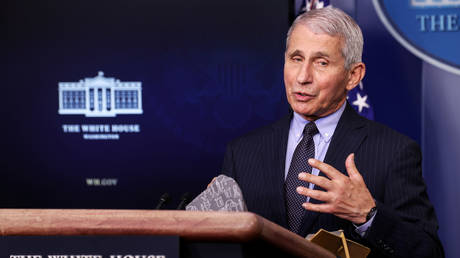 Dr. Anthony Fauci has disagreed with calls to delay the second dose of Covid-19 jabs to inoculate more Americans, rejecting the strategy adopted by the UK government and others to speed up their vaccine rollout.

America’s top infectious disease official made the comments to the Washington Post, as he said the United States must stick to its current two-dose strategy for both the Pfizer-BioNTech and Moderna vaccines.

Fauci warned that, while delaying second doses of the vaccines could allow health officials to provide more individuals with their first dose, it also presents risks, such as leaving people with less protection, particularly against new variants of the virus.

The report on Fauci’s remarks also indicated that he was concerned a change in strategy “would be a messaging challenge,” impacting the confidence that Americans have in the strategy that the government has taken to fight the disease if they just say “we changed our mind.”

The comments come after Fauci spoke with UK health officials on Monday, who published a study that found a single dose of the Pfizer-BioNTech or Oxford-AstraZeneca jab can protect older individuals from contracting severe symptoms or requiring hospital admission.


Contrary to Fauci’s concerns about the risks, a representative from the UK’s Joint Committee on Vaccination and Immunization (JCVI) said that delaying giving people a second dose will “save many lives” by providing more people with some level of protection quicker, backing the current 12-week gap the NHS uses, rather than the 21 days initially suggested.

As with the disagreements between government officials, pharmaceutical companies have been divided on whether to delay second doses or follow a two-dose strategy. Researchers behind the Oxford-AstraZeneca jab found that a single dose of the vaccine has an efficacy of 76 percent in individuals for three months after the vaccine, boosted to 82.4 percent after the second dose. This trial backed the approach taken by the UK over the strategy used by the US, seeing delaying second doses as providing a long-term efficacy and having a significant impact on reducing transmission.

However, BioNTech chief executive Professor Ugur Sahin criticized the UK and said that the current 12-week delay between doses should be halved, as he’s concerned about the limited protection provided by only one dose of the vaccine. But he did accept that “there are some pros and some cons” to the different strategy being employed by governments.