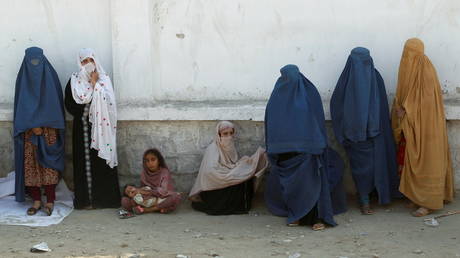 Though the 18-year, $787 million US “gender equality” effort hasn’t so much as created a word in Afghan languages for the concept, a new report is likely to be used by Washington to justify keeping troops in Afghanistan forever.

“Support for gender equality: Lessons from the US experience in Afghanistan” was among the flurry of reports produced for the new administration and presented at the end of February by John Sopko, the Special Inspector General for Afghanistan Reconstruction (SIGAR).

The 242-page volume goes over the entire history of US “gender programs” in Afghanistan, from the October 2001 invasion through the end of 2020, and describes many problems and shortcomings – but ends up concluding they should continue, along with the US presence there.

New report from the US gov on gender equality in Afghanistan. What are we still doing in Afghanistan, you ask? US has spent $787 million on gender programs, not including gender included in other programs. Hope to challenge stereotypes and patriarchy 1/n https://t.co/EVsvaPoY3ipic.twitter.com/uwDdxAZrdR

Researcher Richard Hanania of the Center for the Study of Partisanship and Ideology highlighted a number of passages from Sopko’s report on Wednesday that pointed to the failure of US efforts.

For example, all US efforts in Afghanistan have adopted a policy of “gender mainstreaming, in which the design and implementation of development programs are required to be sensitive to gender norms and disparities,” says the SIGAR report, prompting Hanania to imagine the Roosevelt administration thinking about the “disparate impact” of WWII battles, for example.

The report also points out that there is no word for “gender” or “gender equality” in either Pashto or Dari, two of the most widespread languages in Afghanistan, and that the locals simply use English words instead.

Ppl in disaster-affected communities are esp vulnerable to gender-based violence & we work with partners to protect them. In Dec w/ @IMC_Worldwide we trained ~15K men & women in Afghanistan on #GBV & offered mental health sessions to discuss trauma & other issues💙 @USAIDAfghanpic.twitter.com/qfU4tjjU5T

US efforts to increase female representation in Afghan army and police ran into the wall of “strong familial and cultural resistance,” as the locals regarded such work as dishonorable, unsafe and inappropriate for women.

As of January 2020, there were only 3.25 percent of women in the uniformed police, and less than 1 percent in the military – well below the 10 percent goal that SIGAR admitted was “highly ambitious” to begin with, as the US military itself only has 16 percent of women.

“After 11 years and $110 million in appropriations, this lack of progress on women’s inclusion in the [Afghan security forces] inevitably raises questions about whether such goals are even feasible, and how much money should be dedicated to them,” the report says.

Number of women voters has been going down across the course of the war, both in total and as a percentage of the vote. 10/n pic.twitter.com/opSjQMb5lV

One exception to this was the 2014 presidential election, but it was an outlier in every other respect. It also may have soured Afghans on democracy, as allegations of fraud in the first round caused over 850,000 votes to be invalidated in the recount, and eventually resulted in the power-sharing government of Mohammed Ashraf Ghani and Abdullah Abdullah. The exact same power struggle was repeated in the 2019 election.

Another US initiative insisted Afghans must have “gender balanced” local councils in order to get funding for infrastructure projects. A SIGAR report on infrastructure, also released at the end of February, showed that much US infrastructure funding went on assets that were neither wanted nor needed or could not be maintained. This resulted in objects that went “unused or abandoned, had not been used for their intended purposes, had deteriorated, or were destroyed.”

Also on rt.com
US inspector finds AT LEAST $2.4 billion ‘wasted’ on buildings in Afghanistan in ‘clear pattern’ of misuse and destruction


SIGAR urged US officials to “develop a more nuanced understanding of gender roles and relations in the Afghan cultural context” and “assess how to support women and girls without provoking backlash that might endanger them or stall progress.”

Even so, the report argues that Afghan women and girls “have made crucial advancements since 2001, especially in access to health care and education, and greater participation in the public sphere.” The US can – and by implication, should – “continue to advance gender equality” in Afghanistan by, among other things, advocating the inclusion of women in the peace talks with the Taliban and insisting the “critical” gains be preserved.

Delighted to see @KamairRQ‘s first all-female crew flight from Kabul to Herat! Women in Afghanistan, and around the world, are breaking boundaries while making progress toward gender equality. We must #PreserveTheGains.

Such recommendations fit snugly into the background of reports that the Biden administration will renege on the US commitment to withdraw troops from Afghanistan by May, as envisioned by the 2020 peace agreement with the Taliban.