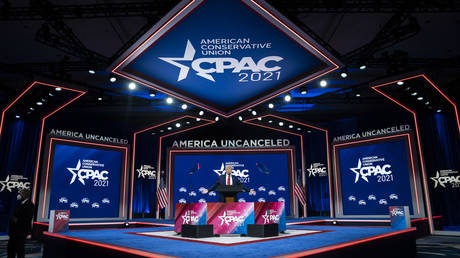 The design firm behind a stage setup at the Conservative Political Action Conference (CPAC) has emphatically dismissed conspiracy theories that their work was intended to resemble Nazi insignia.

Design Foundry, a firm based in Maryland, has come forward to say they “had no idea” their stage layout for the conservative conference held last week in Orlando, Florida resembled the Othala Rune, a symbol found on Nazi uniforms.

The resemblance was highlighted by numerous critics on social media following the event, with even host Hyatt Hotels releasing a statement calling the supposed connection “abhorrent” and saying they had raised concerns with organizers.

In a statement to the Jewish website Forward, Design Foundry insisted the stage was constructed as it was simply to “provide the best use of space, given the constraints of the ballroom and social distancing requirements.” The company said it is “saddened” and “horrified” at the accusations that they helped promote antisemitism.

Foundry has done work for major corporations and events in the past – including MSNBC, Google and even the Biden Cancer Summit in 2018 – but CPAC said it will no longer be using their services in the future thanks to the “unwelcome distraction.”


“It’s clear that the company we retained designed a stage that has become an unwelcome distraction. As a result, we will not be using that company’s services going forward at future events,” Ian Walters, the group’s director of communications, told Forward.

Conspiracy theories were numerous at CPAC, where former president Donald Trump on Sunday made his first public appearance since leaving the White House. But many critics are now pointing to the unnecessary fallout as another example of meritless misinformation being taken too far in the name of political correctness.

“Great work conspiracy theorists,” journalist Yashar Ali tweeted, noting the design firm’s work with the Biden family in 2018 and its CEO Annie Senatore’s own liberal politics as proof of the baselessness of the claims.

1. I know Design Foundry because they handle design for many events in DC for companies like MSNBC & Target.They oversaw the design for the Biden Cancer Summit in 2018.The owner, Annie, is very liberal and was so excited for Biden’s victory. Great work conspiracy theorists. https://t.co/XF51I7WkiG

2. Also worth noting that many of her employees are liberalSo many of you decided to go after something without any reporting or knowledge about who was responsible for the designAnd before you ding her for working for CPAC, you try having an events business during a pandemic

“There was no need to jump the gun on this, companies need to do better at ignoring Twitter noise until they have full facts,” Republican advisor Matt Whitlock added, saying Hyatt Hotels had “poured fuel on the fire” before doing any research.

This was lefty QAnon level conspiracy nonsense from the beginning, but especially absurd that Hyatt poured fuel on the fire before doing any research.There was no need to jump the gun on this, companies need to do better at ignoring Twitter noise until they have full facts. https://t.co/fXNcF5VXU5

We have a conspiracy culture. I waited for facts.Design Foundry was taken aback about the ridiculous accusations, I’m sure.Many accusers will still blame Design Foundry through some rationale. Don’t make excuses. Retract & correct. CPAC was bad enough without the Odal Rune https://t.co/rWADeLFXGU

Incredible how that worked out. A design outfit that has worked for NBC and Target designed the stage. I hope geometry and the burden of proof return to normal. https://t.co/56GKX3vkIG

Hyatt has also found itself the target of attacks by liberals for hosting CPAC in the first place, with numerous prominent Democrats calling for a boycott of the corporation for hosting “Nazis.”

Hey Hyatt hotels. Highly inclusive ,does not mean hosting people who are NOT highly inclusive ,hosting a fascist Nazi convention is the antithesis of inclusiveness .you have made a grave error in judgement .the imminent Boycotts you are going to feel for years to come.

After the hotel chain released statements distancing themselves from the conference and seemingly legitimizing the swirling conspiracy theories, CPAC organizers blasted the company for “caving into the pressures of the politically motivated social media agitators who seek to destroy CPAC, our attendees and speakers from across the country, and the millions of Americans who support our work.”