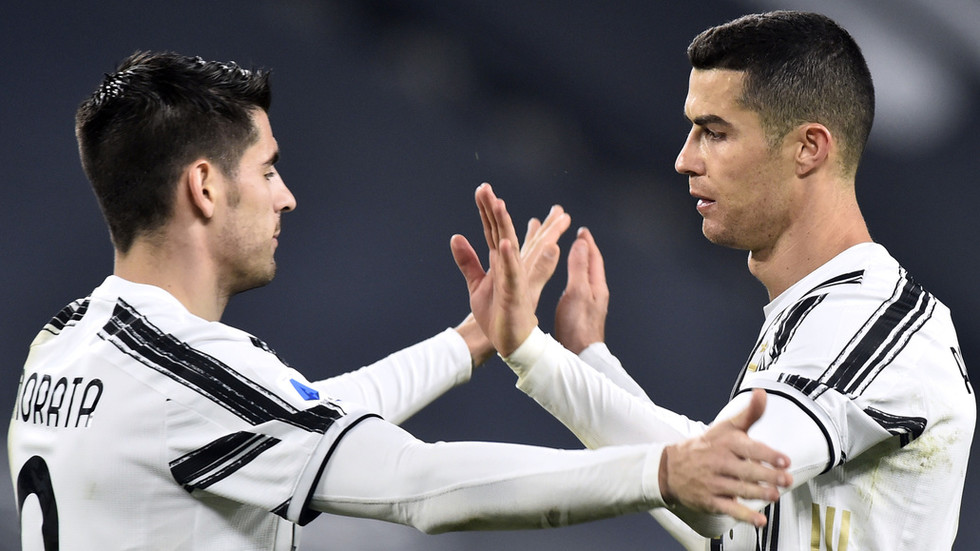 Stats squabblers have warred again after Cristiano Ronaldo hit his 20th league goal of the season to draw level with Pele’s hotly-debated goals record, raging over a figure that seems to put him a step ahead of Lionel Messi.

Relentless Ronaldo scored a relatively routine goal a minute before the end of normal time as Juventus won 3-0 at home to Spezia on Tuesday, moving his side three points behind rival Zlatan Ibrahimovic’s AC Milan and seven behind leaders Inter with 14 matches of the Serie A campaign remaining.

The Portugal captain expressed his satisfaction on social media after moving two goals clear of Inter forward Romelu Lukaku at the top of the division’s scoring chart, although eagle-eyed stats fans seemed far less happy at some of the posts produced during Ronaldo’s charge towards more records.

The first landmark has been a familiar point of contention over recent months: Ronaldo is now thought to have equaled Brazil legend Pele’s mammoth haul of 757 league goals, but the debate over that is likely to go on forever after the three-time World Cup winner and former club Santos argued last year that he had scored more than 1,000 league goals.

With the confusion around that issue frequently descending into jokes about Pele claiming goals he has scored in his back garden for his record, another measure took on a more serious tone.

Data oracle Opta announced that Ronaldo had become the first player to score at least 20 goals in each of the last 12 seasons in one of the top five leagues across Europe – a claim swiftly repeated by match reports and analysis from leading outlets around the world.

The semantics of that statistic are certainly open to interpretation for anyone not feeling the fatigue of more debate around the exact records reached by Ronaldo and arch-rival Lionel Messi.

Figures appeared to show that although Ronaldo has reached the total in each of his last 12 seasons – he came close but scored 18 in the 2008/09 campaign – Messi needs one more goal to have scored at least 20 in each of the last 13 seasons.

Juventus’s official website repeated the statistic, and were on safer ground as they reflected that it was Ronaldo’s 600th league game and the 10th match out of 11 against newly-promoted Italian sides in which the veteran has scored.

The reigning champions have four matches in 11 days starting with the visit of Lazio on Saturday, and number-crunchers and reporters wishing to avoid headaches would be wise to avoid any mention of Pele’s record should an almost-inevitable Ronaldo goal materialize.

Define “official”. Clearly, Pele’s official total has not been updated. There have been reports that in the past 2 weeks alone he has tripled his goal tally with official goals scored in his back yard and playing as himself on FIFA. Sad to see a good man’s achievements belittled

Thanks to his goal yesterday, Cristiano Ronaldo has equalled Pelé in the ranking of the top goal scorers in football history (767 goals) 🔥Now just Romario (772 goals) and Josef Bican (805 goals) are ahead of the Portuguese player ⚽ pic.twitter.com/qddFSGdosA

If official FIFA figures are to be tentatively mentioned, Ronaldo is now five behind the number scored by another Brazil hotshot, Romario, whose views on whether his total is correct have not yet been amplified in the media.

Ronaldo looks increasingly likely to break Czech colossus Josef Bican’s posited record of 805 next season, when another round of arguments are guaranteed alongside the usual passionate exchanges about who can be considered the better striker out of the former Manchester United maverick and Barcelona all-time top scorer Messi.

Juve, meanwhile, need to aim to move within three points of the Milan clubs before the final game of the season, which could be a blockbuster one against Inter, depending on game amendments in a faintly chaotic fixture list.

Manager Andrea Pirlo was pleased by the return of another seasoned striker, Alvaro Morata, following the on-loan Atletico Madrid frontman’s recovery from illness.

Signed as an experienced stand-in for Ronaldo, Morata scored the fastest goal by a substitute for Juventus in Serie A this season, netting 60 seconds after emerging from the bench midway through the second half.

“Morata is the player we wanted for his characteristics as he can attack the space, score goals, but also play with the team,” explained Pirlo. “He has been missing lately, unfortunately. But hopefully he can quickly get back to full fitness.”