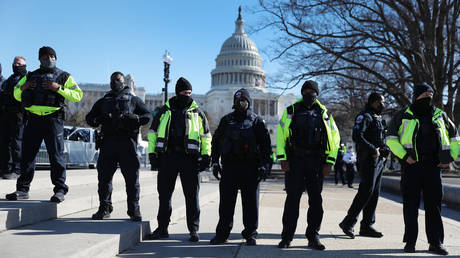 Police at the US Capitol have said they are strengthening security arrangements after “intelligence” suggested a militia group was planning an attack on the building – and potentially members of Congress – this week.

“We have obtained intelligence that shows a possible plot to breach the Capitol by an identified militia group on Thursday, March 4,” the US Capitol Police (USCP) said in a statement on Wednesday.

“We have already made significant security upgrades to include establishing a physical structure and increasing manpower to ensure the protection of Congress, the public and our police officers.”

The threats reportedly relate to a conspiracy theory touted by QAnon and other groups, which says that former US president Donald Trump will return to the White House on March 4.


That date was used as the Inauguration Day for incoming American presidents until 1933, when Congress passed a law changing it to January 20.

On Wednesday CBS News reported it had seen a security brief in which House Sergeant at Arms Timothy Blodgett, who is responsible for Capitol security, said the USCP was monitoring potential threats.

He reportedly said that the USCP had no evidence to suggest that groups would travel to Washington, DC for protests or to commit violence.


National Guard troops have remained at the Capitol since the January 6 riots, during which one police officer and four civilians died, including one protester shot by security inside the building.

On Wednesday acting Capitol Police Chief Yogananda Pittman told lawmakers that threats against members of Congress have shot up by 93.5 percent in the last two months of 2021 compared to the same period last year.

Pittman has called for the establishment of a “standby” force of 80 officers, as well as an extra $107 million more in funding for Capitol police.

Federal prosecutors have arrested more than 280 people in relation to the Capitol riots and charged at least 300.