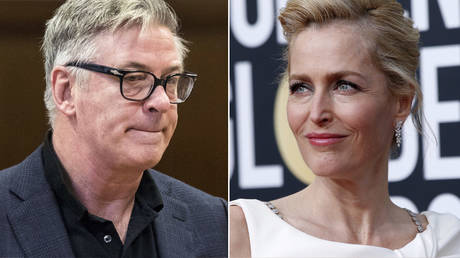 Alec Baldwin’s attempt to defend his wife from accusations of faking Spanishness by invoking Gillian Anderson’s flawless switching between accents backfired badly and forced him to quit Twitter for a second time this year.

In a lengthy 10-minute video posted to Instagram, the 62-year old actor explained that he was off Twitter again, since “you cannot do any irony in the US anymore because the US is such an uptight stressed-out place” and Twitter in particular was full of “a**holes.” Baldwin went on to profess his love for his wife and children and say how good and fulfilling his life was now that he works less and spends more time with them.

The storm of negative comments directed at Baldwin came after his subtle dig at fellow actor Gillian Anderson – whom he never mentioned by name in the video but claimed to admire. Some of her fans were surprised to hear her speak in an American accent last Sunday when accepting a Golden Globe Award for her performance in The Crown. Anderson played British Prime Minister Margaret Thatcher in the fourth season of the Netflix drama and accordingly spoke in a British accent.

“Switching accents? That sounds…fascinating,” Baldwin tweeted, linking a CNN story about Anderson’s accents. The implied allusion was to his wife, Hilaria Baldwin, who took much flak last year for allegedly faking a Spanish accent in public as part of a ‘con’ to appear more exotic and interesting than she actually is.

Also on rt.com
One more for the road! 2020’s ‘Race faker’ trend peaks as Alec ‘Trump’ Baldwin’s wife Hilaria is outed for having posed as Spanish


Amid the scandal, Hilaria apologized for not being “more clear” about her disputed mixed American-Spanish heritage and said she feels a belonging to both cultures. Her husband quit Twitter in mid-January over the controversy, but returned later, following a long-established pattern of a love-hate relationship with the platform.

Anderson’s mastery of American and British accents is not only due to her acting talent, but also family history. Born in Chicago, Illinois, she moved with her family to London and spent a decade there before returning to the US and settling in Michigan. In interviews, she said her original British accent made her a target as a teenager, so she adopted the Midwestern accent, but remained bidialectal, easily switching between the two.

In addition to Thatcher, Anderson has played a number of British characters in her career, including Lady Honoria Dedlock in a BBC adaptation of Charles Dickens’ novel ‘Bleak House’ and sex therapist Dr. Jean Milburn in Netflix’s comedy-drama Sex Education, to name a few.


Some of her fans (or Baldwin haters) on Twitter took a victory lap after ejecting the Saturday Night Live star. “Please, why are men so f***ing fragile” one commenter remarked. Another one said it was funny how Baldwin got smacked for being rude to Anderson and rage-quit over it.

Alec Baldwin deleted twitter because he was rude about Gillian Anderson ,then called everyone on Twitter assholes 🤣

Alec, honey, its not the same thing. Your wife was Rachel Dolezal-ing on every talk show. Never told a soul she was from Massachusetts. GA told everyone she born in Chicago, raised in GB. She didnt get on tv pretending to be Julia Child🙄