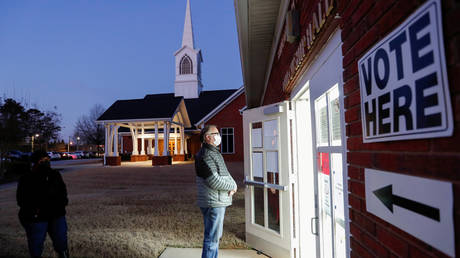 A sweeping reform of election rules has been re-approved by the House along party lines, with supporters celebrating it. But like its predecessor, the piece of legislation vehemently opposed by the GOP faces a Senate dead end.

The so-called ‘For the People Act’, also known as ‘H.R. 1’ after the designation of its House version, was approved in a 220-210 vote on Wednesday. Not a single Republican joined the Democrats in backing the bill, which the two parties see in a diametrically opposing light.

Supporters call the proposed reform the most significant improvement of the US democratic system since the Voting Rights Act of 1965, which prohibited racial discrimination during voting and came in response to the civil rights movement of the era. Critics call it a power grab by the Democrats, aimed at padding the ballot boxes with improper or potentially fraudulent ballots.

Make no mistake HR 1. isn’t meant to secure our elections.This bill is nothing short of an abusive power grab by Nancy Pelosi and the rest of the swamp!

The bill was first introduced in January 2019, after the Democrats secured a majority in the House, and approved months later, but the Senate, which was Republican-controlled at the time, blocked it. The new attempt is facing a similar prospect despite the upper chamber of the Congress now being in Democrats’ hands.

The filibuster rule means that the minority party can stonewall legislation it doesn’t like, so unless it is scrapped, the proposed reform is highly likely to be stopped in its tracks at the Senate level again. Overcoming the filibuster would require 10 Republican votes, but the GOP made it clear that no breaking of ranks should be expected on the bill.


Another potential way to overcome it – through a budget reconciliation process, which requires a simple majority – is reportedly not on the table because the proposed reform doesn’t directly impact the federal budget.

Getting rid of the filibuster also seems to be unlikely, considering that two Democratic senators – Joe Manchin of West Virginia and Kyrsten Sinema of Arizona – said they wouldn’t vote for it.

With the ultimate practical consequences of the H.R. 1 passage in question, Democrats seized the opportunity to blast their opponents, accusing them of relying on dark money and racial discrimination for keeping power.

Voters in Georgia and across the country have suffered from state-sponsored voter suppression for too long. With tonight’s passage of HR 1, we will be closer to ensuring our elections will be fair and free—no matter your skin color or zip code.

That’s because voter suppression is part of their strategy. When you cannot win on policy and social wedge issues, they start tinkering with the voting process to stay alive as a party. They’re scared as hell as that door now begins to close on them too. https://t.co/IiR1crW5qo

The Jim Crow-style voter suppression being proposed around the country is the best proof that we need #HR1 and we need it soon.The right to vote is fundamental to all our other rights.

Proponents say the measures will stand in the way of voter suppression, make elections more secure and give the people more power to vote in candidates of their liking. Critics argue that it infringes on states’ rights to choose their election rules, opens the way for voter fraud and misuses taxpayers’ money, ultimately undermining public trust in US democracy.

HR 1 would render state legislatures completely irrelevant when it comes to election laws.The concept of 50 state elections would basically be erased.