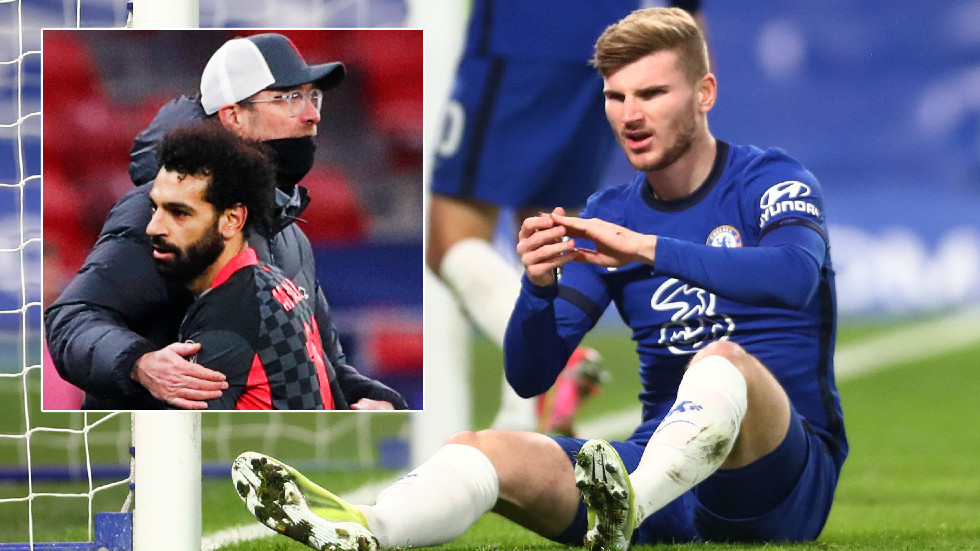 Are Liverpool about to lose a fifth home game in a row? Are Chelsea too defensive to outgun their rivals and bring the best out of the likes of Timo Werner? Here are five factors ahead of the Premier League showdown on Thursday.

Five to forget at non-fortress Anfield?

Liverpool could lose five consecutive home matches for the first time in their history tonight. Since Mohamed Salah’s 90th-minute winner at home to Tottenham – one of only three teams they have beaten in the league since early December – the club have gone almost three months without a home win, making all that talk of their 68-match unbeaten home run until their shock defeat by Burnley seem more like a curse than a cause for celebration right now.

Even the defeat that ended the run seems unsurprising now, followed as it has been by losses to Brighton, Manchester City and neighbours Everton, alongside a loud echo of collective laughter from the clubs that had considered them title rivals just a few months ago.

Liverpool have now suffered four successive Premier League defeats at Anfield, as many as they suffered in the previous 101 PL home games under Jurgen Klopp.The fortress has well and truly fallen.#KloppOutpic.twitter.com/RYPQApTQ5o

That said, there is little doubt that this is, on paper, Thomas Tuchel’s toughest league match of his time as Chelsea manager so far. Everyone is expecting Liverpool to shift from wounded animal to restored predator at some point soon, and their six-match winless run at home still seems pretty extraordinary considering the firepower they have within their title-winning ranks. Chelsea’s first league away match under Tuchel was an impressive win at Spurs – tempered by the fact that Tottenham were entering a dire run of form at the time – and they have not entirely convinced since, recording a narrow, hard-fought victory at bottom side Sheffield United and a draw at struggling Southampton on their travels.

Reading between the lines of Jurgen Klopp’s comments about Chelsea, the Liverpool boss could be interpreted as sensing more of an all-round threat from the visitors under Tuchel. Two quickfire second-half Sadio Mane goals gave his side a 2-0 win at Stamford Bridge when Frank Lampard was in the opposing technical area earlier this season, and Klopp’s conclusion that Chelsea have “changed maybe slightly” since then sounds like an expectation of a much stiffer test to those familiar with his coded diplomacy.

“It’s quite difficult to get more possession than Chelsea,” he said, perhaps with one eye on the elements of tactical mastery deployed by Tuchel in the superb 1-0 win his side earned at Atletico Madrid in the Champions League. “The full package is required, let me say it like this.” Sensibly, Klopp expects Chelsea to use a deep block and then remain patient when they have the ball, looking for counter-attacking opportunities and, if Tuchel has his way, showing a ruthless touch at the right moments in the final third.

Klopp could really do with solving the puzzle, though: a win would move Liverpool into the coveted fourth position that is needed to guarantee Champions League football via the league next season, and a point would take them level with fifth-placed Chelsea, trailing only on goal difference.

Timo Werner’s statement this week that he wants to emulate Chelsea great Didier Drogba might seem as laughable as a comparison between a Ferrari and a kart, but it isn’t the Premier League newcomer’s fault that he is destined to be asked questions about Drogba once in a while. Tuchel acknowledges that inevitability, and also thinks that being a striker for Chelsea is difficult, which might come as a surprise to forwards around the world who don’t have the privilege of playing in front of creative players worth hundreds of millions of dollars every week.

We shouldn’t over-exaggerate how ineffective or otherwise the Germany forward has been during his debut campaign in England so far, though. Ten goals in all competitions and five in the Premier League far from justifies his huge price tag, yet there has been enough to suggest he will succeed at the club, including his acceptance of his need to improve and his willingness to work for the team.

In fact, Werner has scored one league goal more already this season than Drogba managed in his first at the club, and has already played one more game than the future Chelsea legend did during that campaign. Drogba hit double figures in the Premier League the following season before nearing a goal a game, on average, as he reached his peak in his third year.

Patience and loyalty with strikers is even more precious a commodity now than it was in Drogba’s heyday. At 24, Werner has plenty of time to aim for those heights and remains an investment rather than a finished article.

Are Chelsea too defensive under Tuchel?

If Klopp is more worried about revitalized Chelsea, it isn’t necessarily because of the attacking prowess being shown by Werner and friends. A conservative approach was required to secure that marvellous victory over Atletico, coming as part of a run that has seen Tuchel oversee little more than a goal a game across his tenure to date. No surprise, then, to see Tuchel on the defensive about being on the defensive in the build-up, and emphasizing that Werner – or whoever else plays as his No.9 – can expect an even more difficult task than usual against Liverpool.

“Whoever expects us to create 10 big chances and go out of this match with six expected goals has a high possibility to be hugely disappointed,” warned Tuchel, perhaps providing another reason for fans not to be desperate at being kept away from Anfield this evening. “Do we train always defensive? Not at all. We train always offensive and still we are a super-solid team, defensive-wise. It is very complex – how to be solid and still be capable of scoring, how to not just be offensive-thinking and open up three or four big chances for any opponent. We are on it and it is not so easy. If we find a solution, hopefully everybody will see it.”

🗣 “A good performance, defensive-wise, character-wise. We are not in the moment yet where we are clinical enough.”Thomas Tuchel says he was very satisfied with Chelsea’s performance against Manchester United.pic.twitter.com/PeKFpuROya

Suffice to say, the approach under Lampard that was sometimes perceived as cavalier would be most likely to yield a repeat of the reverse fixture.

Liverpool captain Jordan Henderson has spoken about the importance of contextualizing the pressures of the Premier League in the aftershock of goalkeeper Alisson’s father drowning in a terrible incident in Brazil last week. “It is easy to talk about team spirit when the victories are flowing and it almost becomes natural to feel good about one another,” reflected Henderson. “But it matters most at times like this and every single one of the lads has given Ali the kind of love and solidarity that he needs so much right now.”

Klopp has acknowledged how difficult it is to find any words to adequately express his own thoughts on the tragedy. “The world has experienced too much loss recently,” said the philosophical coach, pledging ardent support for Allison as a “wonderful, loving, soulful teammate”. “We have other members of our club who have suffered it. In the city of Liverpool, throughout this country and around the globe, too many have had to deal with the agony of losing a person they love so much. Bereavement is too common just now.

“We must all give Ali as much time as he needs and we must give him space in the appropriate moments also. Our supporters should know that he feels their love and their compassion. I’ve used this phrase, or a version of it, many times previously: football can feel like the most important of the least important things in life. It feels appropriate again tonight. For Ali and all others who have suffered loss, this wonderful game of ours can still bring escape, energy and joy.”