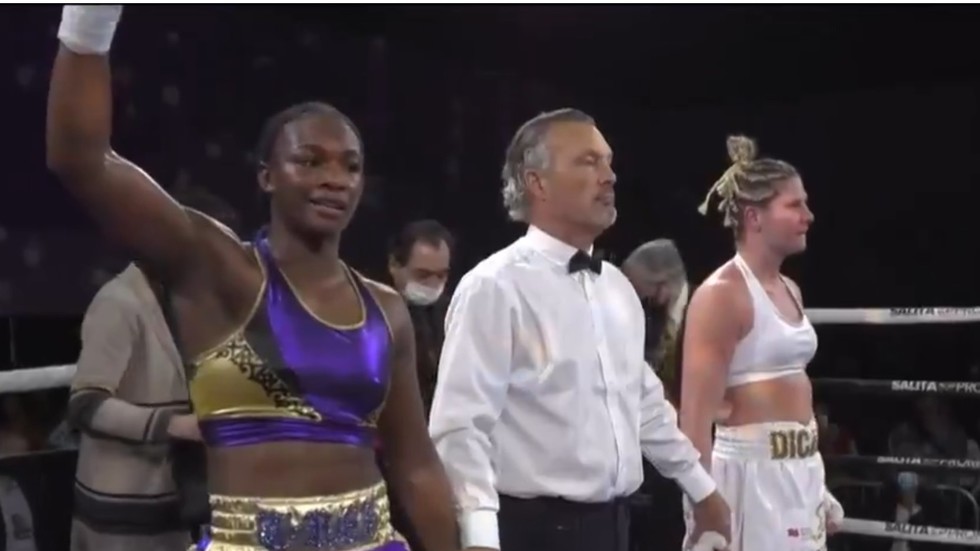 In what could be her last ring appearance before her MMA debut, Claressa Shields became the first male or female boxer to be crowned undisputed ruler in two weight classes in the four-belt era as she dominated Marie-Eve Dicaire.

Fighting in her hometown of Flint, Michigan, Shields won an embarrassingly lop-sided light-middleweight contest 100-90 on all three scorecards, landing 116 punches to her Canadian rival’s 31 across the 10 rounds.

The pair made history by headlining the first-ever all-women’s pay-per-view boxing card, while Shields – who dubs herself the GWOAT (Greatest Woman of All Time) – cemented her status by adding Dicaire’s IBF title and the vacant WBA belt to her WBC and WBO light-middleweight crowns.

The 25-year-old American had previously been the undisputed champion at middleweight.

Friday’s contest was viewed as something of a non-event by some observers, given how utterly dominant Shields was.

“This is the most obvious shutout I’ve seen. Shields has won every second,” wrote promoter Lou DiBella.

This is the most obvious shutout I’ve seen. Shields has won every second.

Shields herself lamented that should couldn’t land the knockout blow, blaming her opponent’s tactics.

“90-100 [on the scorecards], I can’t be mad about it, but she just kept headbutting me and elbowing me,” Shields said.

“I was trying to get the knockout, that’s what I wanted and I almost had it a couple of times, but we got two minutes and then we got the ref breaking up the fight for 30 seconds when she’s holding me and f*cking elbowing me and stuff.

“I’m happy, but I still wanted the KO, I just didn’t have enough time. But at the end of the day I am the new undisputed champion at 154, the first boxer to do it in history, undisputed twice.”

Shields – a double Olympic gold medalist – is now unbeaten in 11 professional outings and also used her post-fight interview to call-out the only woman to beat her at amateur level: Britain’s Savannah Marshall, currently the WBO middleweight champion.

“You won a lucky decision when we were kids,” Shields said.

Before she next steps into the ring, however, the American star could be primed for her debut in the cage.

She has signed with MMA promotion PFL, and is targeting her bow in June, having trained alongside the likes of UFC stars Holy Holm and Jon Jones.

Before seeing off the challenge of Dicaire, Shields had proclaimed herself as second only to Muhammad Ali in boxing history, asserting that “98 percent of men in the world can’t beat me.”

Also on rt.com
‘98% of men in the world can’t beat me’: Claressa Shields declares she’s the second greatest boxer of all time behind Muhammad Ali