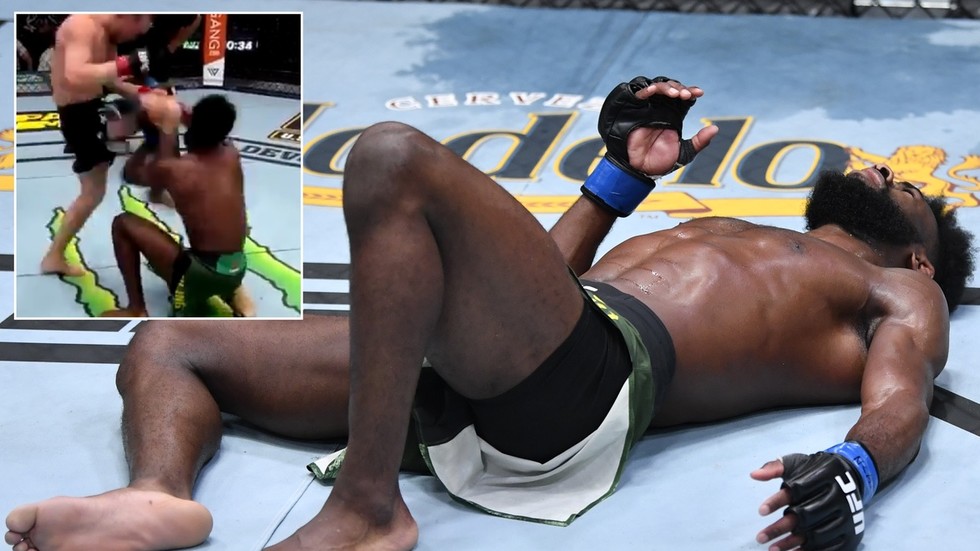 Newly-crowned UFC bantamweight champion Aljamain Sterling has incredibly been accused of exaggerating the after-effects of the illegal knee strike which caused opponent Petr Yan to be disqualified in their title fight at UFC 259.

Defending champion Yan detonated a brutal illegal knee strike on Sterling in the fourth round of their contest in Las Vegas, as the American still had one knee of his own on the canvas.

Sterling was sent sprawling onto his back and immediately clutched at his face.

Amid a lengthy break he was attended to by a cageside doctor, who asked the fighter if he was seeing straight.

“A little… it’s just a little, I mean, I’m lying down so it’s better,” Sterling replied, before appearing to add: “If I stand up, I feel like I could fall over.”

That prompted the doctor to inform referee Mark Smith that “I think we’re going to be done,” as the official waved off the fight and disqualified Yan in a disastrous end to the first defense of his 135lbs title.

Replays showed the full force of the blow – with large numbers of fans astounded by the recklessness of Yan’s actions.

However, some remarkably suggested that Sterling had milked the situation and gone into acting mode as he snatched the title from his Russian rival.

Others, though, branded fans ‘clowns’ if they thought Sterling was overdoing it with his response to the sickening knee strike from Yan.

The overacting theory seems to jar somewhat with Sterling’s own response to being crowned the new UFC bantamweight king at Yan’s expense.

The American called the conclusion to the fight “bullsh*t” and vowed to run it back with Yan, even tossing the 135lbs title to the canvas after it had been wrapped around his waist.

Yan, meanwhile, apologized to his rival, writing on Twitter that the illegal knee had been unintentional.

I apologize and wish speedy recovery to @funkmasterMMA I didn’t mean to throw an illegal strike, I just made a big mistake and paid for it.

Amongst the chaotic scenes at the UFC Apex another man to come under fire was UFC commentator Joe Rogan, who was criticized for proceeding with an interview with Sterling in the aftermath of the dazed ending to the fight.

An upset Sterling told Rogan that he had attempted to continue against Yan despite being “all f*cked up like that,” but that he was “in bad shape and it would have been ego taking over.”

As the dust settles, Yan is left to contemplate defeat in a fight in which he had been leading on two of the three judges’ scorecards, and was seemingly on course for an eighth win on the spin in the UFC octagon.

In the end, the Russian became the first person to relinquish a UFC title through disqualification as ‘No Mercy’ suffered only his second defeat in 17 professional MMA contests.

Also on rt.com
Moment of madness: ILLEGAL KNEE costs Petr Yan title as he is disqualified against Aljamain Sterling at UFC 259 (VIDEO)