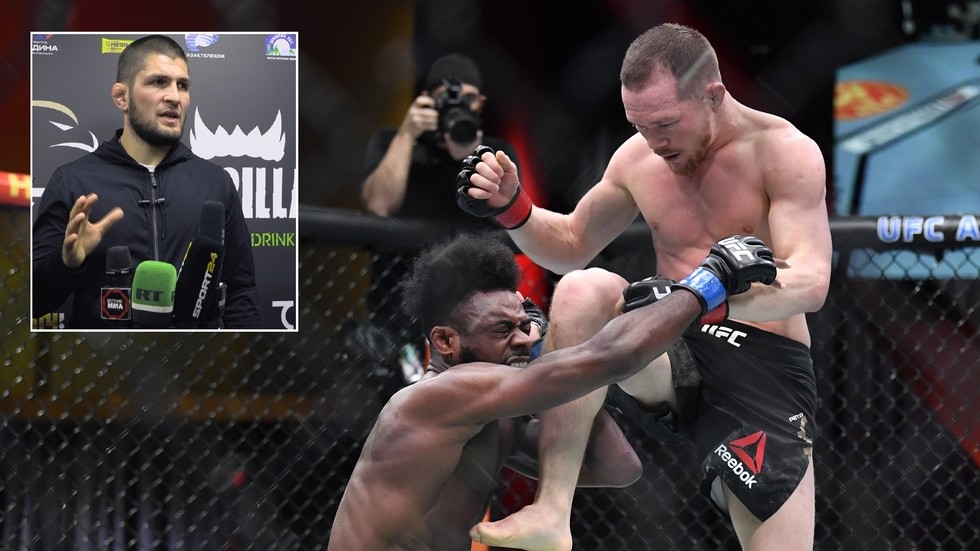 Khabib Nurmagomedov reportedly revealed that Petr Yan was told by his own corner to launch the illegal strike which saw the Russian disqualified in his bantamweight title fight with Aljamain Sterling at UFC 259.

Yan lost his bantamweight belt after he struck a savage illegal knee on Sterling in the fourth round in Las Vegas, with the dazed American being unable to continue.

Yan was leading on two of the three scorecards at the time of the incident and was seemingly in control of the contest.

Also on rt.com
Moment of madness: ILLEGAL KNEE costs Petr Yan title as he is disqualified against Aljamain Sterling at UFC 259 (VIDEO)


Controversy has surrounded exactly why the Russian unleashed the blatantly illegal blow when Sterling still had one knee grounded.

But according to UFC commentary team Joe Rogan and Daniel Cormier, they were told by Khabib Nurmagomedov that Yan had been ordered to strike by his corner.

Khabib was in attendance at the UFC Apex after cornering friend and teammate Islam Makhachev during his victory over Drew Dober earlier in the evening.

“Aljamain, let me tell you what Khabib Nurmagomedov just told us,” Rogan said in his post-fight interview with Sterling.

“He was there in the corner, and Petr Yan asked his corner, ‘Do I hit him now?’ And his corner said, ‘Yes, yes, kick him’, and then he kneed you in the face, which was totally illegal.

“We’re going to have to figure this out, get it all sorted through, but it was clearly illegal. And you were clearly badly damaged from that and it was not smart for you to continue.”

Footage shared by ESPN of Yan’s corner showed his coach Marcos Da Matta clearly yelling “just punch” in English to the fighter, although other members of the team are heard yelling “strike” in Russian, without specifying whether Yan should use his arms or legs.

Fans were quick to claim on social that media that if Yan really had been told to strike with his knee, his corner were culpable for the mistake.

Yan’s corner basically cost their fighter the title in a fight that he was winning. That just sucks. #UFC259

For the record, I know for a fact that Petr Yan is NOT a dirty fighter. He was trying to score offense from all positions the whole fight and he listened to his corner in that scenario. Such an unfortunate situation for both men. #UFC259

Others claimed that Yan was purely at fault, and as a fighter should have known the rule.

At his post-fight press conference, Yan himself dismissed the notion that his team had any role in the illegal blow which led to him losing his title.

“To be honest, I didn’t even understand what [my corner] said to me. I was more focused on [Sterling’s] hands as he lifted his hands off the ground… I didn’t see how he was sitting on his knees, I thought he was squatting down,” Yan told the media.

“I didn’t understand right away [that it was an illegal strike]. I thought again that his hands were off the ground, not on the canvas, I thought I’d done everything right and I didn’t see he still had one knee on the canvas.”

Also on rt.com
‘He takes the title and an Oscar’: Fans claim Sterling FAKED effects of illegal knee which cost Yan belt at UFC 259


An upset Sterling tossed the bantamweight belt away after being awarded it in the cage, and later said he would run it back with Yan for a more fitting conclusion to what had been an engaging contest before the stoppage.

Yan, who suffered a first defeat in the UFC octagon, said it had been “tough” to take but also signaled the pair would meet again soon.

“It’s tough and it’s frustrating, but I think he as a fighter he won’t accept the title this way. If everything’s OK with him, we’ll organize a rematch soon,” the Russian said.

Also on rt.com
UFC 259: Dominant Makhachev calls out Tony Ferguson after defeating Dober to extend winning streak to SEVEN in a row