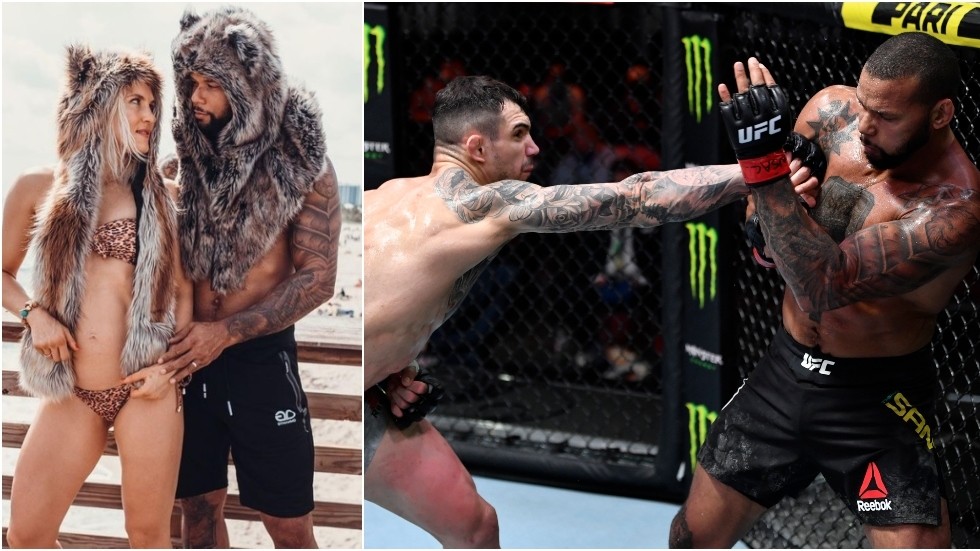 Yana Kunitskaya wasn’t about to take partner Thiago Santos’s unanimous decision defeat to Aleksandar Rakic lying down, with the Russian women’s bantamweight star venting her disgust on social media at the judges’ scoring.

Former light heavyweight title challenger Santos was hoping for a return to the win column after back-to-back defeats as he met Austria’s Rakic in Las Vegas on Saturday night.

The contest had been tipped as a showdown between two heavy-hitters, but in the end played out as a cautious tactical battle without the fireworks many had hoped for.

Rakic was for the most part able to keep Santos at a distance, preventing the Brazilian from unloading the famous power which has brought him 15 stoppage wins from TKO/KOs in his 30-fight career.

Perhaps sensing he was taking a risk by going to the cards, Santos injected more urgency into his work in the last of the three rounds, tagging Rakic with several headkicks although failing to land a decisive strike on the 29-year-old.

When it did go to the judges, the Austrian was given a unanimous decision, 30-27, 29-28 and 29-28, as he picked up a second consecutive win and a sixth in his seven fights in the UFC octagon, further pushing himself into the title conversation at 205lbs.

It was a case of contrasting fortunes for the 37-year-old Santos, ranked number two among the light heavyweight contenders before Saturday night but now facing a slip down the ratings.

The defeat for ‘Marreta’ was his third in a row, after a valiant effort in world title showdown with Jon Jones in July of 2019 and then a submission defeat to Glover Teixeira last November.

But fiancée Kunitskaya, who was in Santos’s corner at the UFC Apex on Saturday night, was not about the accept the latest defeat with a protest.

Taking to Instagram, she shared the fight stats – adding the message “Just gonna leave it here” and the hashtag #bullsh*t.

The Russian expressed similar sentiments on Twitter, writing “robbery” with a thumbs-down emoji along with the same set of numbers.

The figures gave some credence to Kunitskaya’s gripes, with her man outstriking his rival overall – landing 61 shots to 50 – and also landing more significant strikes – 49 to Rakic’s 36.

However, the stats don’t always tell the whole story, and fans took to the replies to dispute the Russian’s claims.

“Rakic won, no excuses,” wrote one person. “I thought Rakic won too, Santos had a lot of trouble closing the distance,” added another.

Rakic himself said that he had executed his pre-fight game plan against the heavy-hitting Brazilian.

“Closing the distance is very, very fast. We know Thiago is dangerous in the short distance with his punches, with his wild punches.

“He has like hammers in both hands, so I needed to be aware of this. I kept it simple. I picked him apart and won all three rounds by domination,” added the Austrian, who put himself in strong contention for a number-one contender bout at 205lbs.

Santos and Kunitskaya were left to lick their wounds, although at least the Russian star won on her previous appearance in the octagon, on that occasion seeing a decision go her way as she beat Ketlen Vieira at UFC Fight Night 185 in February.