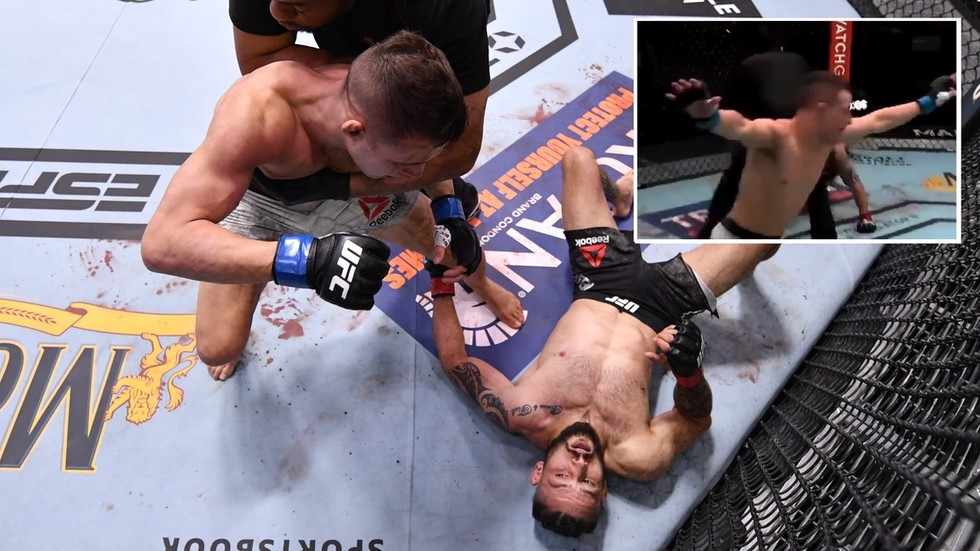 Confusion reigned in the flyweight contest between Kai Kara-France and Rogerio Bontorin at UFC 259 after Kara-France knocked out his opponent and began celebrating, only to come back in an apparent bid to land more strikes.

Brazilian Bontorin spent much of the first round dominating his opponent on the ground, but was caught by a succession of crunching right hands in the closing stages of the stanza, sending him face-first to the canvas.

Referee Herb Dean called off the fight as Bontorin stumbled around the cage, dazed and confused – while Kara-France had already wheeled away in celebration.

However, after glancing backwards the Kiwi perhaps seemed to think the job might not be done after all, and raced back over to his opponent and appeared primed to land another blow – or at least feigning as if he would.

Referee Dean dived in to stop him, while an infuriated Bontorin then sprang to his feet to hurl his mouthguard at his opponent in disgust at his actions.

The UFC shared the bizarre scenes on its social media accounts with the caption ‘what just happened?!’.

Some fans thought Kara-France had run back over to mock his stricken opponent, branding him “a bad winner.”

“Don’t go up to the opponent when his down and pretend to throw another punch on him. Bad winner,” wrote one fan on Instagram.

However, others felt that Kara-France had perhaps been prompted by his corner to go and finish the job in the mistaken belief that the bout wasn’t over.

Some observers blamed referee Dean for the confusion, accusing the veteran official of not waving off the fight clearly enough and leaving Kara-France under the impression he still had work to do.

Nothing. That’s what he did. He let the one dude decide if it was done….didn’t wave off the fight….holds the guy….and then one guy came over to finish it since the fight wasn’t called. Soup sandwich.

Whatever the case, the victory improved the no.8-ranked Kara-France to 22-9 overall, with 1 NC, while Bontorin slipped to 16-3 and 1 NC.

To cap his work in Vegas, Kara-France picked up a tidy $50,000 performance of the night bonus.