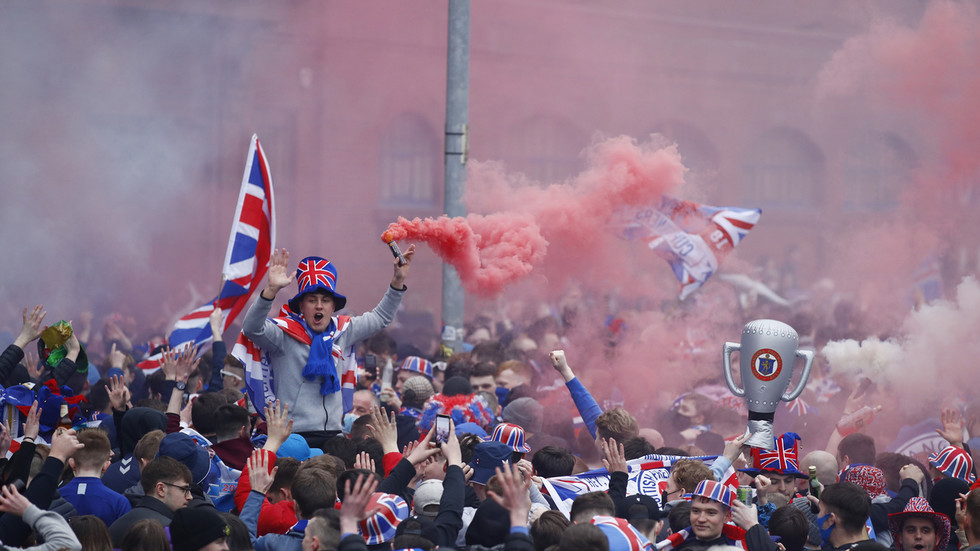 Scottish leader Nicola Sturgeon has hit out at “disgraceful” Rangers fans who gathered in Glasgow to celebrate their side’s first title win in a decade in scenes which she described as “deeply unfair to the entire country.”

Steven Gerrard’s Rangers team completed their 10-year revival to the summit of the Scottish game on Sunday, clinching their 55th league title after city rivals Celtic could only manage a scoreless draw at Dundee United.

Also on rt.com
‘Can you see us now?’ Rangers fans rejoice as turgid Celtic draw to end Glasgow rivals’ 10 year-wait for title


The result put the final nail in the coffin of Celtic’s pursuit of what would have been a record-breaking 10th successive league title for the green & white section of the city and, as one might expect for a team who came so close to financial ruin only to rebound to once again sit atop the throne of Scottish football, the celebrations were marked by thousands of giddy fans assembling in the city center.

But the Scottish first minister was none too happy about the potential impact the droves of revelers may have on Glasgow’s ongoing fight against Covid-19.

Sturgeon branded the scenes outside Rangers’ Ibrox Stadium and in George Square as “infuriating and disgraceful” after repeated violations of coronavirus restrictions which ban mass gatherings.

I share folks’ anger at this. Everyone has made so many sacrifices in the past year & seeing a minority risk our progress is infuriating & disgraceful. It is deeply unfair to the entire country, and the police have a hard enough job already. Please ask fans to go home @RangersFChttps://t.co/haH5DAzhIh

“I congratulate Rangers FC on the title win & recognise what a moment this is for fans,” Sturgeon wrote on Twitter.

“But gathering in crowds just now risks lives, and could delay exit from lockdown for everyone else. If those gathering care at all about the safety of others & the country, they will go home.

“I share folks’ anger at this. Everyone has made so many sacrifices in the past year & seeing a minority risk our progress is infuriating & disgraceful. It is deeply unfair to the entire country, and the police have a hard enough job already. Please ask fans to go home Rangers FC.”

I wonder if the police will be handing out £10,000 fines to Rangers as they did to protesting socially-distanced and risk-assessed NHS workers in Manchester yesterday. pic.twitter.com/bOJ75Yv9pg

“Some of these images from George Square yesterday are truly sickening,” one fan vented on Twitter, while another wondered aloud if they same type of fines will be issued to celebrating supporters as were handed out to protesting NHS workers in Manchester.

Police Scotland confirmed that 28 arrests were made and fines issued to rowdy fans who refused to adhere to orders, while they indicated Sunday that they were “continuing to police” incidents at both the stadium and George Square.

“Public safety remains our utmost priority and I would again remind fans that, in line with the current Scottish Government Coronavirus guidelines, all gatherings are currently restricted,” the authorities said in a statement.