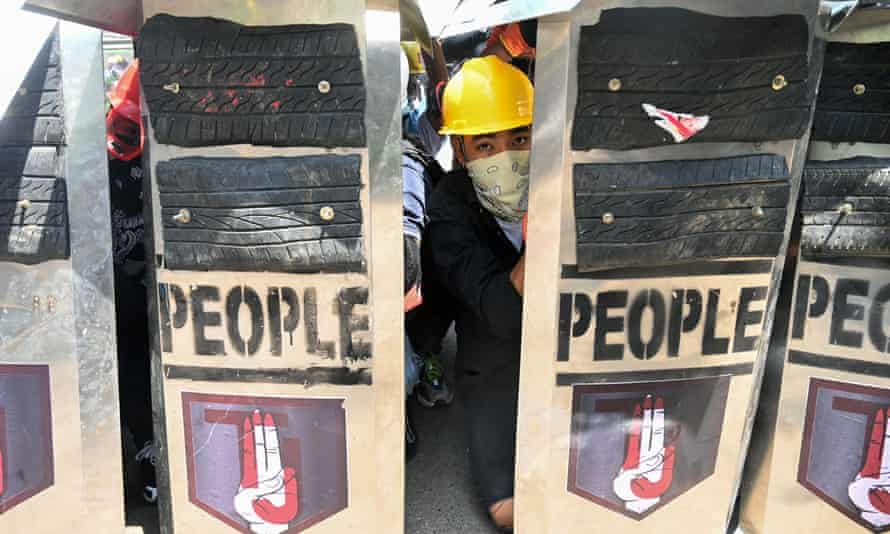 Police in Myanmar have occupied hospitals and universities and reportedly arrested hundreds of people involved in protesting against last month’s military coup, as a coalition of labour unions called a nationwide strike.

Two people were killed when police fired on protesters in the northern town of Myitkyina on Monday, according to witnesses, the latest of what monitors say is more than 50 deaths linked to the uprising. Several people were injured, they said.

Tension was high in the country’s biggest city, Yangon, on Sunday night, where gunshots from heavy weapons could be heard in several areas after the 8pm curfew. The sounds of what apparently were stun grenades could also be heard on videos posted on social media.

Some of the shooting was heard near hospitals, where reports said neighbourhood residents sought to block the entry of police and soldiers.

Security forces have previously targeted medical personnel and facilities, attacking ambulances and their crews. There are fears the police presence in hospitals would allow authorities to arrest wounded people presumed to be protesters.

The international Physicians for Human Rights group condemned the occupation of hospitals, saying in a statement that it was “appalled by this latest wave of violence by the Myanmar military, including the invasion and occupation of public hospitals and wanton excessive force against civilians”.

“If it was not obvious before, it is absolutely clear now: the Myanmar military will not stop violating the rights of the people of Myanmar until the international community acts decisively to prevent and account for these outrageous acts,” it said.

The group said the occupation of hospitals by force was a violation of international law which “only serves to further undermine a health care system already embattled by the Covid-19 pandemic and by the military’s recent coup d’état”.

It said one eyewitness account reported armed security forces entering and seeking to occupy West Yangon General Hospital by force. It said it also had reports of at least five other hospitals in Yangon being occupied by the military, and similar reports from Mandalay, Monywa, and Taunggyi.

An alliance of influential worker unions in Myanmar called for an extended nationwide strike starting on Monday, with the intention of causing the “full, extended shutdown” of the country’s economy in an attempt to halt the military coup.

In a statement, nine labour organisations called on “all Myanmar people” to stop work in an effort to reverse the seizure of power by the military.

Workers in several industries have joined the protest movement, most notably from the state railway and the banking sector.

Moe Sanda Myint, chair of the Federation of Garment Workers Myanmar, said she believed the majority of workers would join. “We are urging to continue the strike until the dictatorship is uprooted,” she said.

Only a few small tea-shops were open in Yangon on Monday, witnesses said. Major shopping centres were closed and there was no work going on at factories.

Andrew Tillett-Saks, Myanmar country program director for the Solidarity Center, a US-based worker rights organisation, said the strike “increases the likelihood that many more from the private sector will answer the call in the days and weeks that follow”. “This is a strategy that could actually plausibly really pressure the military,” he said.

Tens of thousands of people came out in Myanmar on Sunday in one of the biggest days of protest against the coup, despite overnight raids by security forces in Yangon, on campaign leaders and opposition activists.

In a single Yangon neighbourhood, Shwepyitha, at least 100 students were reported to have been arrested, and many protesters were also said to have been detained in other cities, especially at universities.

Police fired teargas and stun grenades in Lashio town in the country’s northern Shan region, according to live video posted on Facebook. A witness said police opened fire to break up a protest in the historic temple town of Bagan, but it was not clear if they were using rubber bullets or live ammunition.

Ba Myo Thein, a deposed lawmaker, said reports of bruising to Khin Maung Latt’s head and body raised suspicions that he had been “tortured severely”. Police in the Pabedan district of Yangon, where Khin Maung Latt was arrested on Saturday night, declined to comment.

Reuters and the Associated Press contributed to this report